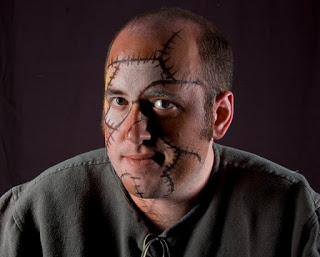 In the LARP that I work on, one of the races available to players is the Homunculus. It’s less like D&D homunculi and more like Frankenstein’s Monster; as with Shelley’s original, they are fully sentient. Within the setting, they are widely abused and mistreated by their wizardly creators, though some wizards are better than others. A few homunculi have escaped their creators and live free, or have been freed by law.

Homunculi are creatures, of predominantly humanoid shape, stitched together from pieces of humans and brought to a semblance of life through powerful magic. The rituals and alchemy that provide their vital spark were secrets long preserved by a reclusive order of wizards, but have been recently learned by the rest of the world. Many homunculi serve their makers, willingly or otherwise. Other homunculi have escaped cruel masters, or awoken alone in a hostile world. Homunculi are despised by many priestly orders and by the majority of humans, as it is commonly known that they do not have souls.

Homunculi are able to graft the flesh of other creatures onto their bodies in place of their own limbs. The process of creating homunculi requires at least some small piece from an existing homunculi, usually a finger, foot, internal organ, eye, or other moderately complex body part. This body part must be used shortly after removal from the donor. Parts from more than one homunculus can be used, but it is not necessary. Most homunculi have only one parent or sire, though some have as many as a dozen. Generally this body part is taken from any convenient homunculus, and the newly created homunculus is not told about the donor. Only particularly kind creators allow homunculi to know who their sire or sires were, and those are rare.

This requirement of a body part from an existing homunculus has created lineages of homunculi among those lucky enough to know their sires, which is only a fraction of the overall homunculi population. Learning of one’s sire and ancestors has become a major social drive among homunculi, representing the only family they can have. It is entirely possible to have five or even ten generations of living ancestors. Free homunculi often research their ancestry to create a sense of family where they had none. In colonies where they live free, these lineages are recited, honored, memorized, and recorded. None of the known lineages reach back more than fifteen generations, though that is far enough for many of them to find common ancestors.

Homunculi are still trying to find a place in the world so that they are not subjugated to the will of another. They are slaves, and even those who yearn for freedom rely on their enslavers for their kind to continue. As a people, the homunculi have only the place in this world their creators forced upon them. What will it take to break out of that?

Homunculus Names
Many homunculi are given ironic or vaguely insulting names by their masters. Some of them go on to reject these names and adopt new ones. Names may or may not reflect anything about the nominal sex of the homunculus.
Brute, Scraps, Mouse, Rosewood, Paunch, Lolly, Silent, Shield-Man, Sticks, Fingerbone, Longshanks, Stretch, Hound, Limper, Husk, Runt, Butcher

Ability Score Increase: +2 Constitution, and +1 to any other ability score
Age: Homunculi have the language and motor skills of adult humans within hours of creation. They do not age, as they regularly replace parts and thus do not suffer senescence.
Size: PC Homunculi have the same range of sizes as humans, and are always Medium-sized. NPC Homunculi could potentially be built Small, Medium, or Large-sized.
Speed: 30 feet
Unnatural Spark of Life: Even basic medical skills can restore a homunculus to life if it has not been dead for long. Another character may restore a homunculus to life with five minutes of work and a successful Wisdom (Medicine) check against DC 15, if the character begins the work within one minute of the homunculus’s death. This repair requires spare body parts from at least one fresh corpse.
Grafting: In addition to using the parts of humanoids for maintenance and repair, a homunculus can graft one body part from a non-humanoid creature to itself, gaining some of that creature’s abilities. The body part must be undamaged at the time of grafting, and it is up to the DM to decide which body parts, if any, of a slain monster are intact enough to graft and should grant unusual abilities. (For example, it’s possible that the dragon has perfectly healthy eyes, but the DM can decide that dragon eyes have no unusual effect.) A Wisdom (Medicine) check against DC 10, performed on any corpse that has been dead for five minutes or less, can discern any usable grafts. For sample graft effects, see below.
Wizard’s Assistant: Homunculi can contribute some of their inner strength to arcane spellcasters, to bolster their spells. When adjacent to an allied arcane spellcaster who is casting a spell, as a reaction the homunculus may expend Hit Dice equal to the slot level of the spell that is being cast to increase its effective slot level by one.
Dim Memories of Life: At character creation, the homunculus chooses a second background, and receives half of her proficiency bonus in the skill and tool proficiencies that the background grants. She also learns all languages associated with that background. She does not gain any of the starting equipment associated with the background.
Often Weak-Willed: At character creation, the homunculus may choose to reduce his Wisdom score by 2 to increase his Strength score by 1. He may do so only once.
Languages: You can speak, read, and write Common and one other language of your choice.

1. My creator gave me food and drink alongside his hounds, and now I always forget any semblance of table manners.
2. I spent so long as a scholarly research assistant that I have no practical experience dealing with anyone outside academia.
3. Since no one expects me to be civilized anyway, I have a gleefully inappropriate sense of humor.
4. To stay one step ahead of my pursuers, I lie about everything, even when the truth might be useful.
5. Now that I am free, I reject any authority over me.
6. All humans lie. I only speak the truth, because I am not like them.
7. I tinker with anything that belongs to me – especially my own body. I can make it better, stronger, faster.
8. I am tattooed with arcane secrets.

Ideals
1. Independence. I must prove that I can live as a civilized person without the support of my creator. (Chaotic)
2. Power. I must refine myself toward perfection, so that no one ever again has power over me. (Neutral)
3. Obligation. I owe everything to my creator, and I will spend eternity paying that debt if I must. (Lawful)
4. Nature. Civilization has done nothing good for my people – but in chaos and ruin, all are equal. (Evil)
5. Knowledge. Scholarly and martial study are both part of the Path of Exaltation. (Any)
6. Guardianship. I lost my innocence a long time ago, and I would save others from the same fate. (Good)

Bonds
1. I remember and avenge every. Little. Insult.
2. My creator is one of the good ones. I am an equal and a friend.
3. I will free my people, no matter how much blood I have to shed.
4. The one who set me free has my undying loyalty.
5. I fight for the powerless, the forgotten, the needy.
6. I have an instinctual devotion to my homeland, imbued by force of magic.

Flaws
1. I cannot speak above a whisper, or at all. Only a few people know my language of hand-signs.
2. I escaped from my creator, and he or she will stop at nothing to recover me.
3. I have disturbing nightmares from the lives – and deaths – of my component bodies.
4. My face is recognizable as a notorious criminal, traitor, or other widely reviled person.
5. My creator’s experimentation left me with a debilitating fear of arcane magic.
6. I am wanted for questioning in the death of my creator.

This presentation differs from the original in DtD in a number of ways, but especially in Dim Memories of Life – DtD’s skill system is very different from 5e, and 5e has some granularity options that the LARP rules do not.

Grafting needs more clear rules support, with example grafts. That will be a separate post in the future; for now assume that many natural attacks and traits are available, where they don’t obviously break the game, but you’ll often have to retune damage. Natural armor (base AC and Dex score interaction equivalent to suits of armor) is also reasonable. The restriction of one graft at a time, ever, is intentional; be careful when relaxing this restriction, because grafts are extra magic item slots.

In DtD, homunculi cannot be wizards, but they can assist wizards in their spell-preparation rituals. That’s hard to do directly in D&D. Also, 5e doesn’t really embrace class/race restrictions, but the source material is absolutely strict on this point. Anyway, Wizard’s Assistant could be tweaked for other settings – in D&D it would not be impossible to imagine this applying to divine casters, and possibly even mystics. (For that matter, in DtD, homunculi also cannot be clerics, because DtD’s mystery cults are unlike D&D’s approach to the gods.)

In DtD, homunculi are required to take one Disadvantage, for which they receive no benefit. 5e doesn’t really have a concept of racial disads, which is mostly fine – so I made this one opt-in. The wizards who make homunculi have found ways to make them easier to control, and a net-loss trade of Wisdom for Strength reflects that.

I contemplated splitting homunculi into subraces, possibly showing a predominance of other races in their creation. This wouldn’t make sense in DtD, but it might be worth exploring for adaptation into D&D. Homunculi who take a +1 Dex bonus could be explained as predominantly elf, +1 Strength could be dwarf or half-orc… that would be the simplest possible approach.

There are a lot of complicated, intensely ugly issues around homunculi as a presentation of slavery and racial bias. We’ve tried to approach that with care and honesty, and if you add homunculi to your campaign, I encourage you to do the same.