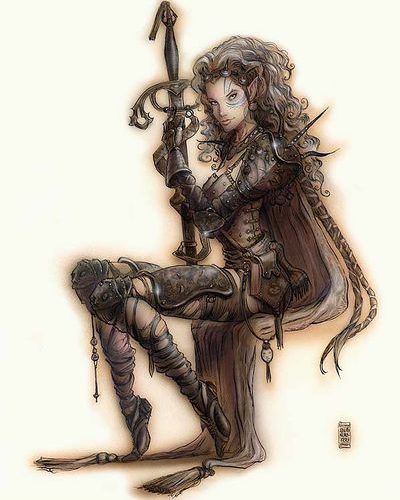 I’ve been intermittently writing a series of posts with personality features specific to each nonhuman race, and today I’m covering aasimar (devas if, for some reason, you preferred 4e). Aasimar go back to 2e and Planescape, but didn’t become as central or popular with gamers over the years as tieflings have. Presumably this is because there’s not really an edgy aasimar concept, but anything is edgy when combined with tiefling. Or, to be more generous, tieflings have always been written with a strong sense of their internal and external struggles, while a lot of aasimar writeups make them sound like they’re living on Easy Street – pretty, trustworthy, valorous, they’re the popular kids who are also the nice kids.

Image: One of Tony diTerlizzi’s original aasimars. Sexualized, because it was the ’90s – but not technically in lingerie!

Let’s see about jamming some more conflict and threat into aasimar, without just making them tieflings with a color-palette swap. The race’s core concept strongly encourages the rampant self-righteousness and pride – the kinds of flaws one expects in angels. Self-righteousness and pride usually blend together into zeal, which is pretty common among purportedly-goodly PCs. It’s inconvenient to make zeal into a race’s central problem, since that implies that sloth is the answer – and “let’s do nothing” needs to always be the wrong answer in gaming, because if sloth is the best solution, you’re rewarded disengagement. Don’t do that.

On the other hand, presumption of zeal is a very workable problem, because it’s recognizable from our own world. Just like how it’s only too common to assume that someone generally looking Arabic or Persian (or anything else that could be confused for those) is an extremist. Let’s suppose, then, that societies and governments in your D&D setting generally have some measure of corruption, because that’s the human nature that we have come to expect. If some of your societies are idyllic because Aragorn has finally assumed the throne… just remember that even Camelot fell. In the past, and continuing intermittently into the present, groups including one or more aasimar attempted drastic actions to depose corrupt magistrates and rulers at various levels. These revolutions have failed, messily, and have also permitted the corrupt order to paint aasimar as dangerous.

Please note: I’m deliberately muddying waters as to whether the revolutionary aasimar were good, bad, or indifferent. Spin this however you want – the point is that the Crown and other elements of the social order are suspicious of them as a group, and that suspicion falls upon uninvolved individuals. I’m not defending jihadists.

Naturally, people who get to know aasimar realize that they’re basically fine, and aasimar are no more likely to be awful than any other group. This works in real life too! This doesn’t stop aasimar from having bad stuff follow them around. Everything they do is reinterpreted in the worst possible light. Society as a whole may not hate them, but the more invested someone is in the exploitative parts of the social order, the more likely they are to despise aasimar.

Like turbulent priests everywhere, the ideal aasimar comforts the afflicted and afflicts the comfortable. I’m sure that someone that angelic has never been satisfied. They probably have a really hard time turning a blind eye or staying quiet, which means that they’re probably spending a lot of time in exile or the black cells under His Grace’s keep. (It’s okay, they have darkvision and cast light and daylight… what a friggin’ waste.)

Of course, depending on the cosmology you’re working with, aasimar might also be born of fallen angels, or of angels devoted to the service of neutral or evil gods. Not in Planescape’s original cosmology, as far as I know, but… well, I won’t try to tell you your setting, but unless you know and care about hardcore Planescape canon (you know who you are, and I respect that), there are any number of ways to spindle, fold, and mutilate so that aasimar are more ambiguous figures than the core writeup presents.

In addition to the adjustments to the racial writeup I’ve proposed above, these personality features are heavily inspired by Celestials in Dust to Dust. Celestials have a very different backstory than aasimar, having been immortal creatures themselves rather than children of angels, but the Venn diagram of their typical attitudes has a lot over overlap. Several items here are specific nods to DtD perspectives – in case you’re wondering how purity got matched up with evil, for example.

I’ll reiterate a point from previous posts in this series: these personality features aren’t meant to fully replace your background features. Pick a few from your race and a few from your background, or if the DM permits, take a full set from your background and a few from these lists. Or just use these as differing perspectives on how aasimar might think and behave. Keep in mind that D&D is a collaborative game – don’t want to pick features that will make you unpleasant at the table. A little friction is fine, as long as everyone is on the same page with it. Talk things out, and be willing to walk something back if it’s going to spoil another player’s experience.