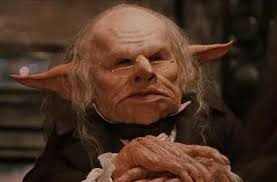 I’ve been working for a good while now on unique personality features for each race. The exact implementation of these ideas is left to each DM – maybe you pick two or so of these and the rest from your actual Background, maybe you get additional personality features. The DMG is pretty loosey-goosey on how you gain Inspiration, so I don’t feel too bad about doing the same here. Anyway, this post covers goblins, because I’m guessing they’re one of the most popular “monster” races to play as a PC.

There are a ton of different views and iterations of goblins, sometimes more than one in a single setting. Personally, I see them as the coulda-woulda-shoulda of PC races – they’re not evil to their core, they’ve just been cast out, rejected, and forced into villain-like circumstances. In my Aurikesh setting, goblins are one of the fey kindreds, and they are primarily merchants, artisans, and scroungers for the Highlords. The PCs in my campaign have encountered goblin-fey probably half a dozen times, and have yet to find a reason to fight them.
I’m sure there are two dozen different homebrewed rules blocks for goblin PCs online, and we’ll have an official one in Volo’s Guide to Monsters this November.

What I enjoy about doing racial personality features is that it lets me think about each race from their own perspective, not as an individual, but as several different individuals with contrasting outlooks. Other than Pathfinder‘s psychotic goblins, I tend to find goblins fairly sympathetic in games – World of Warcraft’s sleazy merchant/pirate goblins, Sir Terry’s scum-of-the-earth but intensely hardworking and awesome goblins (I especially like their naming scheme), and so on. I can enjoy a game in which goblins are evil through and through, but it’s not my favorite vision. A bit of gallows humor (a redundancy, to be sure!) just makes them more fun.

What I’ve tried to present here is a version of goblins that have internalized and reframed cowardice (let a few goblins die so the rest of the tribe survives), constant desperation and deprivation, just a soupçon of sadism, and none of the niceties of “civilized” people, but could still make pretty good adventurers. The contrasts between goblins, half-orcs, and tieflings are particularly interesting to me – they’re all treated like dirt, but in different ways, and they respond to that treatment differently.

Also, I read the Goblins webcomic for years, so I’m like an expert or something.

Do you have a favorite interpretation of goblins in gaming? Tell me about it in the comments!