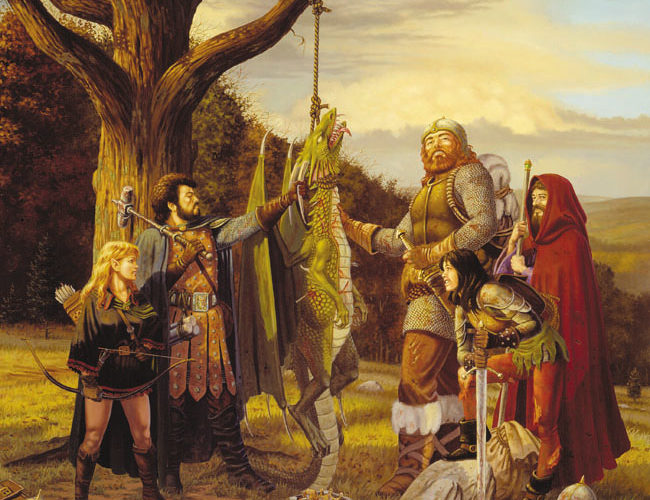 Note the paltry amount of filthy lucre. The piece is “Dragon Slayers and Proud of It,” by Larry Elmore.

Last month, I talked about six different approaches to distributing cool treasure in tabletop games. Today I’m looking at the same question from a different angle. Let’s say you’ve figured out what’s going to be available to the players. How do you record it in your DMing notes, and how do you put it into player hands?

Published adventures present one approach: every room in the dungeon or encounter in the flowchart has a writeup explaining what’s there – creatures, furniture, action, and loot. The Dungeon Master’s Guide of each edition tends to teach content creators to mimic published adventures – to write the whole adventure before the first session of play. There are a few issues with this kind of approach.

The point of this is that I approach session prep – even dungeon-crawling sessions – without specifying which pieces of treasure (or quantities of coin) lie in each nook and/or cranny. This created a different problem in my games: because I was creating each new encounter as the need for it arose in the course of play, I would often forget to give the creatures interesting treasure. They’d have pocket change and basic gear, because I hadn’t laid the descriptive groundwork for them to have anything more interesting in the course of the fight. My games, as a result, were stingier than intended.

Further, there were particular types of treasure I needed to hand out, either to advance areas of gameplay that I wanted PCs to think about, or just to support class functions. Alchemists need alchemical recipes and wizards need access to spells. For that matter, other spellcasters need scrolls. For whatever subconscious reason, when I needed to come up with treasure on the spot, I wasn’t providing sufficient amounts of these treasures.

To solve these problems, I use an adapted version of a technique I learned from LARPing: the per-event loot bucket. Because of the way a boffer LARP’s event staff works, there’s often not one person keeping a mental tally of the treasure that goes out in the course of the event. In theory, a Monstertown Manager (the person managing the volunteers and sending encounters into play) could do that. In practice, more than one person might have the conn in the course of an event, and it’s simply not practical to keep a hard-copy record of the amount and variety of treasure that goes into play.

The loot bucket is a way of pre-determining the “outcome.” Before the event, a staff member with access to the game’s treasure and item-tag props sets aside treasure and item tags sufficient to the minimum amount of treasure that needs to go into play, and puts all of that into a bucket. When encounters go into play that should distribute treasure, whether that’s a social encounter that might drop some cash on the PCs, a swarm of wandering monsters, or the exploration of a musty old ruin, the people responsible for the encounter pull what feels like an appropriate amount of treasure out of the bucket. The game’s goal is an empty treasure bucket come Sunday morning.

For a recent adventure, the PCs were going into a place called the Hawthorn Palace, where a powerful warlock bound to Lhyragyth the Thornweaver held sway. To gain access to the warlock, named Antoine Belcourt, the PCs needed to gain masks of passage equal to the number of party members (seven). I wanted to hand out other treasure along the way and make sure that encounters had more reward than just another mask. (The mask of passage is a magic item invented for this situation; it provided the PCs with enough fey glamour to get past the doorman, basically.)

I wanted the PCs to work their way into the Hawthorn Palace (going through a series of encounters in a hedge maze of thorns to get there), and hunt around the inside of the palace until they found enough masks for the whole group (or came up with some alternate solution that I hadn’t anticipated). I didn’t want them to have to explore the whole palace; among other things, I knew I couldn’t complete that in 8-10 hours of gameplay.

I created the following list. Whenever it felt appropriate for the PCs to find some treasure, I described them finding the next 1-3 items from this list (I mostly went in order, though that was as arbitrary as any other approach).

To explain a few of these entries – the game runs on a silver-based economy rather than gold, and the PCs have to pay a 10% cut to moneychangers whenever they turn Gallmontese money into Tyreman, or vice versa. They grumble about this in a way that I take to be in-character.

Fey-hound hide is a crafting component, in case anyone ever decides they want to try crafting magic items in my game. (Someday I’ll finish and publish that system.) Blighter’s Caustic Sludge is an alchemical formula. Death’s-head effigy is a necromancy spell I created, because the most active PC wizard is a necromancer but the Player’s Handbook doesn’t really have enough necromancy spells to make Grim Harvest do its job.

Casting Time: 1 action
Range: 60 feet
Components: V, S, M (the skull of a humanoid)
Duration: 1 minute
You cause a humanoid skull to float in midair, 6 feet above the ground, in a space adjacent to you for the duration of the effect. It lasts until the duration expires or you cast this spell again. When you cast the spell, you may make a melee spell attack that deals 2d8 + your spellcasting ability modifier piercing damage, against a target within 5 feet of the skull; or you may make a ranged spell attack that deals 1d8 + your spellcasting ability modifier necrotic damage, against a target within 60 feet and line of sight of the skull.
On your turn, you may use a bonus action to cause the skull to repeat one of these attacks. You must be adjacent to the skull in order for it to move, and your speed is halved while you move the skull, but you can move it as part of your movement in a round.

At Higher Levels. When you cast the spell using a spell slot of 4th level or higher, the damage of both kinds of attack increases by 1d8 for every two slot levels above 3rd.

I also wanted to communicate the decadence of the Hawthorn Palace by including art items, which is another thing I usually don’t remember to do. Between the silk robe and the gems, I think I more or less got my point across here.

This wasn’t the whole of my session prep, but in terms of reducing stress on the spot and helping me meet my goals as a DM, it was the best single return on investment. This list of twenty items – repetitive as it is – probably didn’t take all of fifteen minutes to type up. The rest of my session prep was creating an outline of the problems the players needed to solve in order to assassinate Belcourt. I rephrased this into in-play terms and handed it to a PC as downtime research results. I also wrote three monster stat blocks – one for Belcourt himself, and two for new types of ogres I was planning to use to beat up the PCs. (These have since been published through ENWorld’s EN5IDER Patreon.)

There’s nothing really revolutionary about this technique, but it is useful for condensing the things that need to happen in the course of the session into something I can use at a glance, without seriously interrupting the flow of narration. Here’s another example from a more recent session:

1. 100 silver maravedis
2. Three gold teeth, worth maybe 15 silver each
3. 250 copper centimos
4. The Cleaving Blade of Sorilka: +1 weapon (can be reshaped into any bladed weapon); +2d6 damage vs creatures that are resistant to non-silver damage or vulnerable to silver.
5. 1 piece of orichalcum, in the shape of a pipe elbow
6. Beruch letter (a text prop I had written in advance)
7. 130 silver maravedis
8. A bundle holding 10 lb (4 pieces) of whalebone
9. A healing potion (2d4+ 2)
10. 1 pearl
11. 5d10 silver maravedis
12. A yew wand with 5 charges of faerie fire. Does not recharge.
13. Crimson Choker: This choker is made of fine bones and red silk. As a reaction when you are hit by an attack, gain resistance against piercing or slashing damage until the beginning of your next turn. 4 charges; regains 1d4 charges at dusk, and 1 charge when you deal a critical hit with a piercing or slashing weapon.

Notably, the crimson choker showed up in a goblin-fey merchant’s possession, and the PCs did not wind up wanting it badly enough to trade their sizable store of firearms for it. Having this list on-hand as a source for “interesting stuff that a merchant might have” also put me in a good position to have magic items for sale, without having the whole DMG for sale. The cleaving blade of Sorilka the PCs received from the fey knight Sorilka herself – an encounter I had not planned prior to the session, but that proved to fit well with the flow of how the PCs wanted to handle their problems. Orichalcum and whalebone are both intended for crafting, though the PCs also have a few different people willing to pay them cash on the nail for orichalcum.

I hope that this technique lowers barriers to entry for people who want to try running 5e tabletop games. I happen to enjoy session prep, but never have more than 1-2 hours to spare even for a day-long session. Creating content for this blog and my Tribality column is both the cause of and solution to that problem.