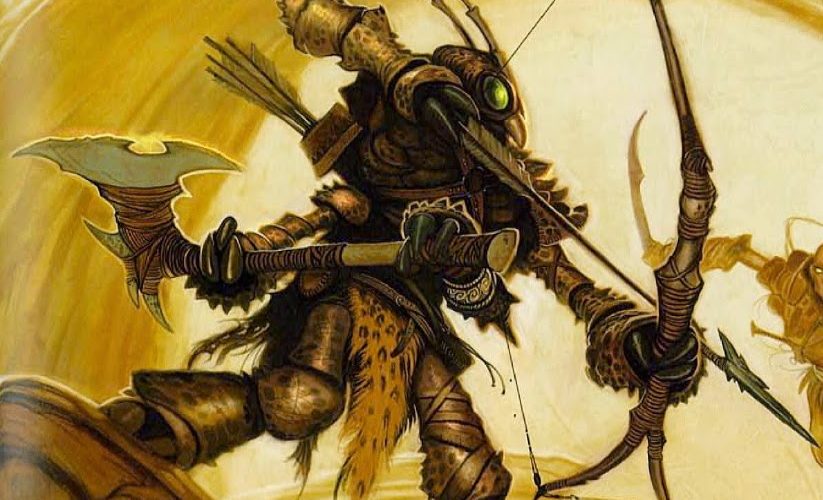 Not too long ago, I wrote that I thought I was coming to the end of this series of posts. Then a reader reminded me of all the races I hadn’t touched on yet – slightly further from the beaten path, but still popular enough to merit a full post of personality features. It looks like I’ll be doing a few more of these! Today: the thri-kreen, most known for their appearance in Dark Sun, but soon becoming a standard part of the Monster Manual (if not the Player’s Handbook).

Thri-kreen aren’t easy to write, because there’s this tension between thri-kreen are bizarre and alien and as a PC race, they need to be comprehensible and good team members. That means both that the person playing them needs to understand what motivates them – otherwise you’re just taking random, nonsensical actions – and that the rest of the table needs to feel confused (but not too confused) by what they’re doing. If D&D were a pure simulation of the fictional universe it presents, this wouldn’t be necessary – the player could just get a foley artist to record mandibular clicks and never worry about how impossible it is to interact with other players at the table. D&D needs to be fun for everyone at the table, though.

It looks like 4e really struggled with this issue. The 4e thri-kreen writeup in the Dark Sun Campaign Setting shows significant shifts from earlier thri-kreen presentations, giving them the ability to speak intelligibly (if awkwardly) in Common. Actually, looking at it now, the original 2e Dark Sun setting is surprisingly ambiguous on thri-kreen speech in the common tongue; it seems to be mostly later work that removes this capacity. In any case, the 5e MM is clear on the point that thri-kreen cannot speak Common, but communicate by writing it. (Here’s one 5e rendition of thri-kreen as a player race.)

I do want to call out the 4e version as a very good two-page rendition of the race. It has a lot of work to do to communicate this race to a player, and I think it establishes its terms and the thri-kreen psyche particularly well. It pushes the narrative of alien-ness with an emphasis on instinctive reactions to stimuli. A few of these border on “how would that ever become instinctive?” such as looting the dead, but they’re useful shortcuts to thri-kreen motivations.

The thri-kreen clutch memory became one of my favorite parts of the writeup in short order. I’ve always found unexplained, intrusive, or borrowed memories interesting as a source of stories and mystery, as the PCs in most of my games will tell you.

I considered trying to go more outright alien in the grammatical structure of the features, or even scrapping the whole concept of traits, ideals, bonds, and flaws and going for something stranger. I still feel that that approach would be worth exploring, but for this post I’ve settled for something approachable and readily usable for players and DMs.

I think my central piece of advice for playing a thri-kreen is to go for weird word choice in dialogue. Think about how the thri-kreen distinguish things – for example, I’ve gone with “sentients” rather than “people” to suggest that idea.

More so than other races in this series, make sure you read a thri-kreen writeup such as the one in the 2e or 4e Dark Sun sources. It has a lot of key specific details that explain what goes on here. The general geek consciousness has a pretty good idea of what goes on with elves, dwarves, and so on – we’re still not even one standard deviation from Tolkien’s elf culture packet, which his son Christopher published under the title The Silmarillion. Even much less common protagonist races like homunculi have Mary Wollstonecraft Shelley to draw on, and a hundred or so iterations on her work. Not so for the thri-kreen, I suspect. They’ve been in D&D since 1982, but I question how much penetration into our imaginations they’ve gained.

Finally – this list isn’t custom-fitted to Athas. The only one that really doesn’t work well for Athas is Bond 3, but if you’re playing in a 5e Athas, make sure your choices reflect that setting in full.