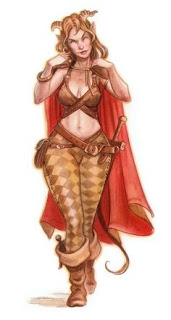 This is the eighth article in my series on personality traits, ideals, bonds, and flaws for the PC races of D&D 5e. Along with dragonborn, tieflings are one of the more divisive races of D&D, with plenty of grognards insisting that any races introduced after 1979 or so are right out. On the other hand, they’ve been immensely popular with the rest of the community, as they’ve gradually gone from their introduction in Planescape (in 1994) to a core “monster” and a Forgotten Realms player race in 3.0, (2001), to a core player race in 4e (2008) and 5e. They’ve always been the exotic, edgy ones, giving us a clear place (other than the half-orc) to talk (ham-handedly) about fantasy racism and whether evil is inherent or learned.

I was also a fan of 4e’s Bael Turath backstory for tieflings, to the point that I was planning to adapt that into my own 4e setting… but the game ended before the campaign named “The Road to Bael Turath” quite got there. Reverting the tieflings to their Planescape-style backstory is fine too, but the sense of heritage and group identity in Bael Turath is a particularly useful source of motives for heroes and villains alike.

For these traits, I’ve emphasized their outcast status and the poverty and crime that often accompany it, as suggested in the Player’s Handbook. There are also a mix of sinister and virtuous elements, for tieflings who want to emphasize the morality play of their existences.

With these personality features, I’ve tried to show a race that deals with venomous racism on a daily basis, with a more mystical bent than half-orcs. I also threw in some things that (I hope) come across as “charmingly louche,” in an Oscar Wilde sort of way. Reading quotes from Wilde, Dorothy Parker, or Ambrose Bierce should put you in the right frame of mind to play a scathing wit.

Since I invoked Braga in writing about half-orcs, it won’t surprise anyone that Hannah is an inspiration here. I’m sufficiently frustrated with how things ended in Vol 3 that I didn’t go back to re-read for quotes to use, which is a bit unfair to the awesomeness that is Hannah in Vol 1 and 2. As a reminder, these aren’t intended to completely replace your personality features from your Background. These bayliefs are more like a seasoning, so use them gingerly and don’t get carawayed. I cayenne see how that could easily happen, of course. I’ve mustard all the puns I can think of to get my point across, and now I think I’ve run out of thyme.