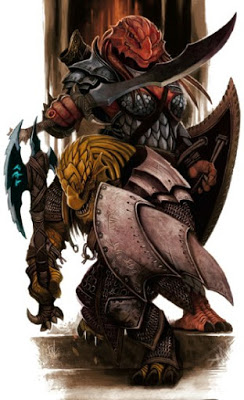 It’s been awhile, but I have an ongoing series in this blog where I dig deeper into the non-human races of D&D and give them tables of traits, ideals, bonds, and flaws, as additional or replacement options for the personality features of their Backgrounds. We come now to the dragonborn, a race with a sort of complicated history in D&D; it’s probably most accurate to say they got their start as the draconians of Dragonlance, though they certainly weren’t a playable PC race there in the early going. (I don’t know when or if that changed; my Dragonlance lore is limited to Chronicles, Legends, Second Generation, and Dragons of Summer Flame.)

I quite liked the dragonborn of 4e’s default setting, Nerath. The conflict between Arkhosian dragonborn and Turathi tieflings was interesting, and I liked that it was a still-relevant story of a time when humans weren’t the dominant kindred of the world. (Yes, I know the Turathi were more-nearly-human at the time. I’m talking about the dragonborn here.) I felt like Nerath made that lore more immediately relevant than many of the (often unspecified) wars between elves and everyone else. I… have no idea what the dragonborn lore of Forgotten Realms is these days, though I understand that they come from Abeir during the conjunction of the two worlds. That struck me at the time as a waste, since saurians are a long-established part of FR lore.

The 5e PH sets dragonborn up to be Noble-ish Doubleplus-Proud Warrior Race Guys, as contrasted with the half-orcs’ Grimy Angry Warrior Race Guys. PWRGs can be some of the most insufferable people at the table, but then I’ve had to say the same about every race in this series – no one is so famed for being insufferable jerkwads as elves, but it doesn’t have to be that way. Choose personality features that will get you into trouble, but talk to the other players about them when you choose them, and don’t choose five different ways to aggravate people. One, maybe two, should be more than enough.

A lot of my approach here is influenced by reading Marsupialmancer‘s fan update of Council of Wyrms. That setting doesn’t have dragonborn because it was a 2e setting, but it doesn’t require any great stretch to embrace the PH’s text on dragonborn and backfill them into the setting. I thought it would be interesting to have someone who didn’t literally think he was a full dragon, but treated them like family.

This isn’t really intended to replace all five of your personality features from your Background, as I mentioned above. You could play it that way, but I’ve assumed your Background has some influence on your nature. Most DMs won’t object if you have more traits, ideals, bonds, or flaws than the norm, as long as you can manage them all consistently. (Obviously, an action that satisfies two personality features at the same time doesn’t pay two points of Inspiration, because you can’t have two points of Inspiration.)

One of the few PCs I got to play in 4e was a dragonborn fighter who had joined the Doomguard in Sigil. I wish that campaign had continued – the DM was dropping some really interesting hints about the character’s ancestors. Anyway, I love dragonborn in principle, even if they’re not right for every setting, and I hope these personality features offer an interesting perspective on them as individuals.