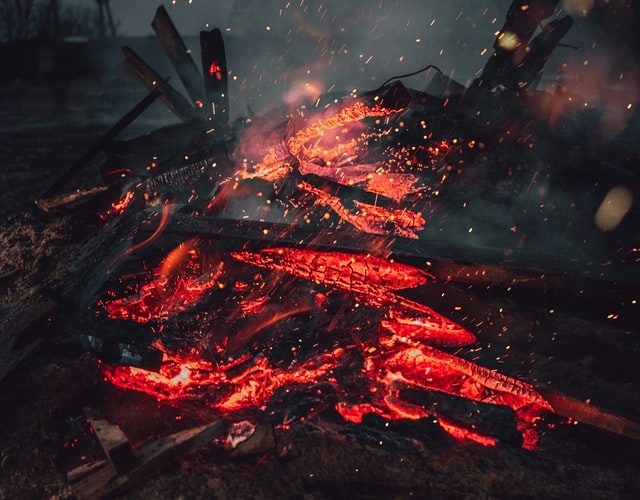 This is a new draft of a warlock patron for Under the Seas of Vodari. It’s slightly changed from its initial appearance in my Patreon.

Whether from above or below the waves, you have looked into the volcanic fires that flow from the beating heart of the world. What you saw there, the voice that spoke to you, changing you forever with the dual power of flame and corruption.

In the Seas of Vodari setting, the god Volkan tried to burn out all of the fear and malice that he saw within himself; he wished to be a Destroyer God no more. But the ashes of his divine power that he cast out were still a divinity unto themselves, and took on a partial sapience that could still grant power to mortals.

Corruption in the Flame Features

The Corruption in the Flame allows you to choose from an expanded list of spells when you learn a warlock spell. The following spells are added to the warlock spell list for you.

1st-level Corruption in the Flame feature

You can embody one side of your patron’s dual nature for a time. As a bonus action, you can choose one of the following, which lasts for 10 minutes. Only one can be active at a time, but you can end one and immediately choose the other when you cast a spell using a Pact Magic slot.

Flame in the Deep

1st-level Corruption in the Flame feature

6th-level Corruption in the Flame feature

When Exaltation in Flame ends, you regain 1d8 + your Charisma bonus (minimum 1) hit points. You can regain hit points this way a number of times equal to your number of Pact Magic slots, and regain expended uses when you finish a short or long rest.

When Seed of Corruption ends, you vomit out inky bile, and you can roll a new saving throw against one curse with a duration of less than 24 hours, disease, or effect that causes the poisoned condition. On a success, that effect ends.

10th-level Corruption in the Flame feature

Your Exaltation in the Flame feature now deals fire damage equal to your Charisma modifier to creatures of your choice within 5 feet of your initial target. Your Seed of Corruption feature now deals 4d6 necrotic damage when you use your reaction.

14th-level Corruption in the Flame feature

You can transform a newly-dead creature into a new form, so that it may serve you. As an action, choose a creature that is not a construct, elemental, or undead, that has died within the last minute, and whose remains you can see.

The creature has all of the normal game statistics for a creature of its type, except that it can’t regain hit points through any means. It has no knowledge of its previous life or any ability to communicate while transformed. It obeys your mental commands and acts on its own turn. It dies when it is reduced to 0 hit points or after 8 hours. You can use this feature once, and can’t use it again until you finish a long rest.

At Higher Levels. When you cast this spell using a spell slot of 5th level or higher, the damage increases by 1d6 for each slot level above 4th.

Fundamentally, my thinking about subclasses (warlock subclasses most of all) is that you need to be constructing a playstyle. What that means to me is that the subclass introduces a wrinkle in the player’s decision-making process, causing that decision-making to differ from characters of other subclasses. Because Attack and Cast a Spell are going to be your main action in 90+% of combat rounds, many classes make something out of bonus actions, one way or another; features that trigger off of attacking or casting a spell are also common. As you see, I’ve played with both of those things here, in making a stance-based warlock.

My one problem with stance-based subclasses? Especially when someone else writes them, I kinda want to write just one more option, in about the same vein as writing new Battle Master Maneuvers or Totem Warrior totems.

There is also a little bit of this that is me thinking about thematically viable replacements for the now-quite-dated Fiend patron, and working myself up to taking another run at a replacement Archfey patron.

The new spell is my riff on Shadowflame from World of Warcraft, thanks to a suggestion from Stands-in-the-Fire. My idea was that the ravening part means the fire intensifies after burning the first target.

6 thoughts on “New Warlock Patron: Corruption in the Flame”