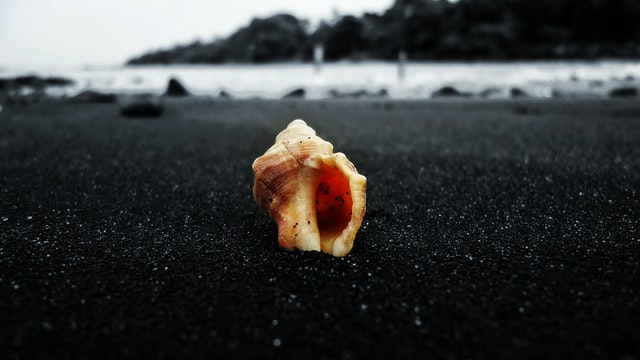 Thanks to the backers of Under the Seas of Vodari’s Kickstarter knocking out a ton of stretch goals (yes you can still preorder! Click the link!), I get to write more magic items for the book. If you’ve read this blog for any length of time, you know that I love writing magic items, so getting paid for it is a nice bonus. (Y’all crushed a bunch of other stretch goals too – I’m sure I’ll be posting about that adventure once I start writing it.)

This conch or nautilus shell carries decoration appropriate to its rarity; the rarest versions of this item are priceless cultural heirlooms. When you hold this shell and speak its command word, the shell preserves the next words that you speak. The number of words it preserves depends on its rarity. The shell glows faintly while it is recording your spoken words, and ceases glowing when it reaches its capacity. The recording pauses while you are not holding the shell. You can command the recording to end before reaching its maximum capacity of words. The shell only records your voice, with no extraneous sounds.

Commanding the shell to record a message while it currently holds one erases the previous message. For this reason, the command words of rare, very rare, and legendary speaking shells are usually deliberately eradicated after one use.

You can command it to repeat its message at any time, and any number of times. The shell pauses in speaking while you aren’t holding the shell.

The cord attached to this bone harpoon is made of a living chain of cellular creatures. When you throw this harpoon and hit a creature, it has disadvantage on Strength or Dexterity check.

The harpoon has 3 charges. If you expend a charge when you hit a creature with the harpoon, it has disadvantage on Strength and Dexterity checks for 1 minute. For the next minute, until it falls to 0 hit points, or until it ends its turn more than 60 feet from you, it takes 1d6 necrotic damage at the start of its turn, and you regain 1d6 hit points. The harpoon regains 1d3 charges each day at dawn.

The harpoon from the UtSoV quickstart:

Harpoon. While underwater and making a ranged attack with a harpoon against a target within normal range, the attack roll does not have disadvantage.

When you use an action to make a ranged attack with a harpoon, if you hit a creature that is up to one size larger than you, you can use a bonus action to attempt to pull the creature towards you. The creature must succeed on a contested Strength check against you or be pulled up to 20 feet toward you.

This shield is made from the massive shell of a turtle. While holding this shield, you can use a bonus action to sling the shield on your back and cover yourself in spectral force. You gain 40 temporary hit points that last until you make an attack, cast a spell targeting a creature other than yourself, deal damage to another creature, or move more than half your walking or swimming speed in a turn. Once this power is used, it can’t be used again for 4 hours.

Rod of the Baneful Eye

This rod is made from a petrified merfolk arm, its fingers splayed; in the palm of the hand is a closed eye. When you cast a spell using this rod as a spellcasting focus, you can command the baneful eye to open and mark one creature that your spell targets or that is in the area of your spell. The baneful eye can mark up to three creatures at a time in this way, and when you mark new creatures past the third, the earliest one marked is lost. A mark immediately ends when the marked creature dies.

As a bonus action, you can close your eyes and see through the eyes of any of the three creatures the baneful eye has marked, for up to 1 minute.

While you see through their eyes, you can cast blessor bane without expending a spell slot, targeting the marked creature and creatures that it can see. You can use this power three times, and regain all expended uses at dawn.

This suit of chitin plate has been lacquered a rich red, streaked with black and gray. While wearing the armor, you gain the following:

This armor was handed down through a succession of Scatho’s champions, who used its properties to weaken the attacks of enemy heroes, champions, and duelists before major battles.

Speaking shells are another idea for how underwater people might use magic and the world around them to record information, since paper isn’t much of an option for them.

Leeching harpoons are… not a lot more than a notion that the rope of a harpoon seems like something magic could turn into a siphon.

Elder turtle shield comes from looking at the shield art in the UtSoV quickstart PDF and thinking about what kind of magic item it would be. I am, at times, a simple creature. I think a huge pool of temp hit points that you lose if you go on the offensive is still great for some characters and some situations – or an amazing panic button for a warrior about to face a ton of damage before their next turn.

Rod of the baneful eye is imagining some story into place around one of the deep dreamer kaiju that I still plan to write for this book. A way to spy on an enemy that got away (or that you targeted in secret) seems like a great chance for shenanigans, but it only does anything if your target survives the encounter; adding bane creates more shenanigans, while adding bless gives you ways to use this on your allies.

Scatho’s armor of ruin comes from the spikiness of Alaskan king crab legs. I don’t know what to tell you—I take all of the inspiration I can get, and there are clear, specific reasons that I’ve eaten a lot more snow crab than king crab in my life.

One thought on “Five Magic Items from the Sea”