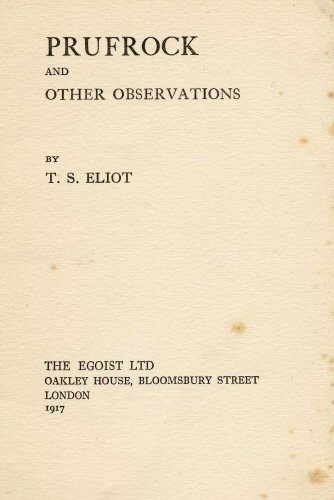 Okay, look, quoting T.S. Eliot back and forth at each other was a significant part of how I got to know Kainenchen. All the more so when we reworked “The Naming of Cats” and “The Waste Land” to be about Fallen Earth, the MMO we both worked on. My point is, it’s April, which is a) the cruelest month, b) an ideal month for obnoxious tomfoolery, and – quite separate from the first two points – c) the month in which I, six years ago, asked Kainenchen to marry me. It’s a big deal around here. A lot of lines from Prufrock could make interesting D&D spells, so here we go. (These aren’t in any particular order; I’m just kind of writing them as they take shape.)

The tendril is not a creature and can’t take damage from any source. It can only be dispersed by winds of 20 miles per hour or greater while it is asleep; otherwise, it can’t be dispersed by any strength of wind.

You hammer a creature’s mind with intrusive psychic force, in the form of a question. Choose one creature within range that you can see or whose name you know, and ask it a question. If the question you ask is nonsensical or a riddle, the creature must roll an Intelligence saving throw. On a failed save, it suffers 6d10 psychic damage and can’t speak intelligibly until the beginning of your next turn. On a success, it suffers half damage and no further effect.

If the question you ask is one that the creature can understand, it can choose to answer to the best of its ability, either aloud or telepathically, as you can pluck the answer from its mind. If it chooses not to answer or attempts to dissemble, it must roll a Wisdom saving throw, suffering 6d10 psychic damage on a failure and giving you the answer to the question. On a success, it suffers half damage and gives you any answer it wants. You can’t tell whether it has succeeded or failed this save.

At Higher Levels. When you cast this spell using a spell slot of 5th level or higher, the damage increases by 1d10 for each slot level above 4th.

This spell creates a permanent conjunction between a portion of the Material Plane and another plane of existence. Choose a 100-foot square within range, and place the plane-attuned rod in that area. As part of the spell, you can alter or hide the forked rod in any way you wish, as long as its final value is less than or equal to its starting value. The spell ends if the forked rod or its alternate form is destroyed.

Within the area of the spell, you are simultaneously on both the Material Plane and the other plane. Ambient effects of the other plane affect the area. This affects spells and other magical effects (such as teleportation circle, which is limited to travel on the same plane) but does not affect nonmagical travel.

I hope you’ve enjoyed these spells as much as I enjoyed creating them. I expect to write a few more posts like this one over the course of the month.

2 thoughts on “The Forbidden Grimoire of J. Alfred Prufrock”