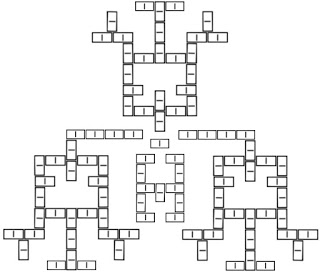 The final three-day event of the Dust to Dust LARP campaign ran last weekend. Dust to Dust has been a part of my life since 2006, and even though it has to end, I still have a hard time believing that it is done. I’ll probably be writing a lot of retrospective posts about it, and I’m starting with one of the most different things that we did – and the one that has already seen the most borrowing by other games.

In August of 2007, in Livejournal, I was doing a bunch of semi-public design work for DtD. I posted the following:

The core of this idea comes from crossing Noumenon (a truly obscure tabletop game) and Puzzle Pirates.
I’ve been pondering a system for ceremonial magic that would require less Plot presence. This would allow your entire system of magic to be based more fully on rituals that have a chance of failure, but also allow player skill and character skill levels to affect the outcome.
Once they’ve completed their roleplay of the ceremony (the same point at which a card or bead draw would normally be made), the lead ceremonialist player receives a bag of dominoes. He draws a number of bones equal to his relevant skill level + 3. Each contributing ceremonialist draws one bone. Characters may commit various additional resources (mana or other components) to draw a larger hand. Characters keep drawing bones as they pose them. These dominoes are played collectively, with the goal of using as many pieces as possible. (Or completing as many squares as possible, to increase the challenge.) Any given ritual has a required number of successes; falling short of this has a backlash specified by the ritual, while success and exceptional success (an extraordinary number of successes, or playing the game in a more challenging way) also have stated outcomes.
There are probably some serious holes in this that I’m overlooking, but it’s basically LARPing with minigames that can be played solitaire. It can even be turned into a competitive game for contested rituals, as you simply use the same pieces to play a two-player game.
Thoughts?

With a lot of hammering and discussion, this turned into the Ritualism rules that we published on the DtD website. There are a lot of moving parts in these rules, and there are more complexities that become apparent in the spells. I want to break it back down to its component parts and talk about why some of these elements are useful; my goal is to make it easier for future games to borrow or hack these rules.

Throughout this post, anywhere that I use the first-person pronoun to talk about the design of ritualism, please understand that other staff members – especially Stands-in-Fire – and players made indispensable contributions and I am unintentionally hogging credit.

The central idea of the system is that domino bones are both your budget for spells and your physical tool for casting spells. Because I like Vancian magic (it’s okay to disagree with me, but neither of us are likely to convince the other of anything), this is about storing spell effects for later use, and having spellbooks crammed with spells that do narrow things. The other central idea is exploring ways to store complexity that you can resolve and move on. That is, you have complex resolution at a time of low tension, resulting in simple outcomes at a time of high tension.

The flavor text is important. It essentially serves three purposes: first, it showcases world lore (and you should always look for places to drop setting lore, so that names and events are just a little bit familiar when they come up somewhere else); second, it helps to communicate the theme that guided spell design (especially important if you’re doing something unusual); and third, it greatly enhances the collectible-cup feel of the magic – especially if you have a single story broken up across multiple spells. The rune is the presentation of the puzzle. I created the majority of DtD’s ritual runes in Paint.NET, and over the course of the campaign I played around with different kinds of junctions that the casters would have to match. There are a few dirty tricks one can use here – such as requiring seven or more bones of the same value to touch, or requiring objects other than ritual bones to be part of the rune – but overall this is fairly straightforward. Many of the runes I created were vaguely pictographic, but low enough on granularity that you’d never get it if you didn’t already know what I was imagining.

Honest-to-God warning to others: it is harder to not draw sex organs than you think.

The rules text is where all of the serious moving parts are, so I’ll break this down further.

Cooperative Casting adds a significant complication to these rules. Here again, we could only use rules like these because all of the serious complexity is stored in the caster’s spellbook, and the caster always has to have the formula visible to cast it. It does mean that two casters working together can cast a spell that neither one of them can quite yet cast alone. We wanted it to be possible to play a politician-wizard who pretty much chills out in the tavern and gets other wizards prepped for battle.

Removing cooperative casting entirely would make ritualism a lot less interesting, since cooperative puzzle-solving is fun. Fatigue distribution is a good place to serve other end goals, as Calamity’s Theurgy system does.

The whole system would have been less than worthless if it had required marshals for common use. Some specific spells required a lesser or greater spirit present in order to function, for reasons intrinsically obvious to those spells – for example, you can’t plane shift to the Realms Above without a marshal present, and without us doing some prep work. This did increase the burden on staff, but we planned around it to make it work.

Okay, everyone understands what I mean by rules hooks, I hope? It’s a situation in the game that is concrete and definable enough to be a trigger for something else to happen (or be able to happen) without anyone needing to adjudicate anything.

Some of our favorite rules hooks:

We also had hooks we never got around to using (that I recall – the list of spells is immense and I might have forgotten some):

Here again, I think there were more unused ideas, but they escape me at the moment.

The system has some elements that make it difficult to work with. While I don’t get much joy out of speaking ill of this creation, full disclosure is best.

The Future of Ritualism

Thus far, I know of five different LARPs that have lifted this system in whole or in part, and one of them has added a poker-based style to make Deadlands-style hucksters manageable in a boffer LARP. I’m thrilled to have contributed a set of ideas to LARPing as a broader form. I think there’s also room for a system that uses (larger, less easily to lose) bones as treasure, such that maybe I find a 2|5, a 1|6, and a 0|3 bone as the loot from an adventure, and I spend them along with your 1|2, 3|5, and 6|6 bones to do something cool. It would be a lot of prop-creation work overall, but remembering all that Shattered Isles did with Sculpey, it’s within reason and would probably be really memorable. (Also you wouldn’t be constrained to 0-6 or 0-9 faces – or for that matter even rectangular shapes.) This would be particularly ideal for an archaeology-related system.

You know, I think Eclipse is already doing something like this with their genetics system, and I just haven’t paid attention to it because I’ll probably never get Med Tech 10, much less the rest of the prerequisites.

I hope this post is useful to others planning to write and run boffer LARPs, to explain some of why DtD’s ritualism works the way it does. If you have questions, I’m happy to answer them.