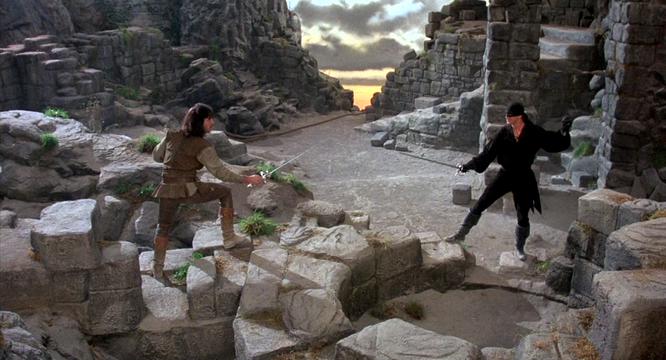 Four years ago, as we saw the first hints of what 5e would become, I wrote about hoping for more engaging gameplay outside of combat for fighters, based on my experiences from LARPing. In this post, I’m looking at more ways to individuate warrior-types and potentially inform their roleplay. In two UA articles, we’ve seen Mearls experiment with fighter subclasses that reframe Battle Master-like mechanics, and that’s a big part of my underlying concept here.

There’s just two problems with that. I don’t really want a radical proliferation of fighter subclasses. The emerging dynamic of the subclasses is that the Champion has very little to manage, the Battle Master has more to manage, and the Eldritch Knight plays like a multiclassed fighter/wizard. I would rather find a way to branch directly off of the Battle Master. (Even if that takes this idea out of the OGL-friendly pool.)

The other problem is that I don’t really want to limit it to fighters. I would like a way for barbarians, Valor bards, War clerics, paladins, rangers, rogues, and Blade warlocks – everyone who relies first and foremost on being awesome with weapons – to get in on this. In part this is because King’s Gate and Dust to Dust have no concept of character class, so in imagining KG and DtD characters in 5e, some of them would be warrior classes other than fighter, and I wouldn’t want to hedge them out of martial schools as a result.

Also: 7th Sea recently released its second edition. You probably heard about this. Fencing schools are a big part of 7th Sea, and if you work at it, you could combine a fencing school with any other character-build element.

The good news is, Martial Adept is a feat that anyone could buy. It’s not really the centerpiece of anyone’s character build, because it’s once-per-short-rest and it’s just a d6 superiority die if you’re not already a Battle Master or a playtest subclass with superiority dice. It is a good way to add a tactical option to your play if you’re playing a class without a lot of those, or you just want to dip a toe into complexity.

I’ve used Martial Adept as my design container for this idea. I thought about storing all of this in a new feat that requires you to have at least one superiority die, but that pushes this character element out to 8th level if you aren’t a fighter or a variant human.

The martial schools listed below are a combination of King’s Gate, Dust to Dust, and Aurikesh groups. I’ve written a quick blurb about each below, since the Venn diagram of readers who know about all of these schools is in single digits. I do not own the King’s Gate names or concepts in any sense, and they are offered here as fan work.

Battaglia is a double-dagger school of assassins. In the hands of an Assassin rogue, this is horrifyingly powerful, since they’re already forcing critical hits on their surprise attacks. This could reasonably turn a critical attack of 22d6 + 2d4 + flat adds into 25d6 + 3d4 + flat adds. (That third d4 is being a little generous on probability, just as the absence of a twenty-fourth d6 is being faintly stingy on probability.)

Coudray is a school of the King’s bodyguards – honorable, sword-and-shield knights. The feature I’ve chosen for them here is potentially very good, depending on how much they can get enemies to focus fire on them with individual attacks. If this feature doesn’t float your boat, substitute in the Sovereign Knights of the Council Fire.

Kinsale is a cloak-and-single-sword school. They’re all about getting opponents to underestimate them. For most D&D warriors, an empty hand is wasted space, so I made this feature especially potent – it’s both a defense and a disarm, as you stop the enemy’s attack and wrap your cloak around the weapon.

Moriscato is a school for arrogant street bravos, fighting with rapier or longsword and dagger. The feature I’ve used here is specifically based on a power from KG called Shiv, a high-damage dagger attack that has to be delivered from behind.

Roux is, other than a cooking thing, a school of graceful fencers, closely related to courtly dancing. They fight with longsword and shortsword. This feature is a weaker Evasion, in a way, or a really really good way to make sure you get to use your Evasion feature if you have one. It also lets you help an ally, though much less reliably.

Rowan is a school of sword-and-shield berserkers. In KG, their signature move is ignoring wounds by banging or gnawing on their shields. Here, I’ve emphasized their incredible toughness and ability to reduce incoming damage.

Vachir is a school of archers who bind their souls to their bows. I’ve given them the same feature as the Displaced Hand from DtD (see below) because cool features specifically for archers is harder than it looks.

I’ve left out several Orders from this list, because they don’t fit into D&D well – they either explicitly require a tie to magic, and thus should be stored in a different feat, or they require the homunculus race. I may revisit this in the future.

Displaced Hand is a school of trick-shot performers with any kind of ranged weapon. As mentioned, they share their feature with the Vachir of KG. Getting to act when they roll initiative, before initiative is even resolved, is huge, but they resolve the damage a little unusually to avoid some kinds of synergies (Assassin rogues in particular).

Dane’s Bulwark are Scandinavian-inspired shield fighters, wielding either a longsword or an axe. They have a feature based on holding a door against attackers, but door fights aren’t nearly as significant in tabletop games as they are in boffer LARPs, so I’ve turned that into resisting any kind of forced movement or the prone position.

Lost Blades of Mazhan are katana-and-wakizashi warrior-poets. The feature I’ve given them here is a conceptual adaptation of a power from DtD, in which they feint with the katana to deliver a devastating strike with the wakizashi. Obviously, it carries a lot more punch for actual Battle Master fighters than anyone else, since they have more and better superiority dice to spend.

Sand Spire are spear, glaive, or halberd-wielding soldiers. They are accustomed to fighting in formations and cooperating closely with their allies. Here, I’ve given them line-fighting ability – they can all use the Dodge feature and wait for an enemy to make an attack and expose themselves to devastating counterattacks. Superior polearm reach lets them focus even more attacks on a single enemy.

Shieldeaters are howling berserkers who disdain armor and shields. It’s not easy writing features for a concept so thoroughly covered in the Berserker barbarian subclass, but I figured a chance at a very high AC at the start of combat would appeal. (Imagining you’ve worked your way up to 16 Dex and d12 superiority dice… well, even a one-in-twelve shot at a 25 AC for a fight might be worth your time.)

Silver Swordsmen wield silver or silvered swords (shortsword, longsword, bastard sword – that’s a thing in DtD if not in 5e – or greatsword) to defend the land against the shadow creatures and werewolves that plague it. Here I’ve emphasized their ability to turn aside Shadow magic, which I’ve parsed as necrotic damage.

The warrior societies of Aurikesh were some of my earliest creations for the setting, and I’ve described them in much more detail here and here. It has bugged me for years that I haven’t had a good mechanical representation for them, so only a tiny number of characters have opted to join them. (I also haven’t made them a huge part of the setting, which is both cause and effect.)

The Iron Temple are pragmatic and strong-willed warriors, and perpetual underdogs in politics and their rivalry with the Sovereign Knights of the Council Fire. This feature represents their bull-headed nature, and they can pass on some of that benefit to allies.

The Sovereign Knights of the Council Fire are knights of high chivalry with a legalistic bent. I’ve made them active defenders of their allies, juicing up the Protection fighting style based on the currency cost.

The Tiger’s Claw favor scimitars and pistols. They serve a sinister wizard of the distant north. This feature is inspired by Warhammer: Age of Reckoning‘s Witch Hunter class, which built up points on an enemy through repeated hits before delivering a devastating finisher.

Cursewardens bear a curse that makes magic behave less predictably around them. This isn’t a punishing amount of damage compared to a failed saving throw, but it might immediately break a caster’s concentration – if that works even once, you’ll feel great about picking this up.