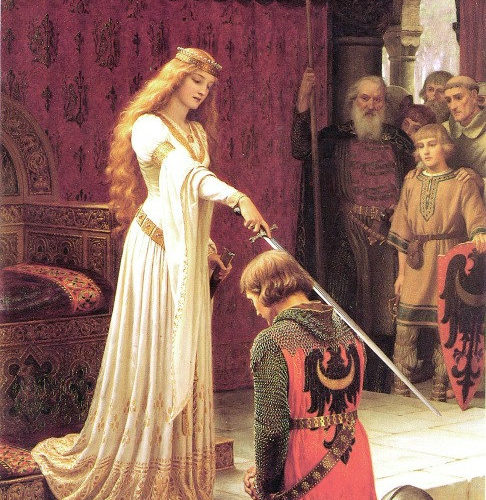 I’m a bigtime fan of 5e’s introduction of Backgrounds, particularly as a source of skill and tool proficiencies and noncombat features. Even more than (most) classes and subclasses, Backgrounds also suggest a trajectory of your personal story, beyond zero-to-hero. But within that arc, your Background features don’t change. Inspired by skill powers from late-ish 4e (as described in The 4e Megathread), I want to explore what leveled-up, late-game Backgrounds might look like.

Part of the premise I’m asking you to accept is that Backgrounds aren’t strictly the misty reaches of a character’s past, but continue to meaningfully inform who they are now. They touch on who the character is when they’re not coming together with 1-5 of their closest friends to practice the fine art of stabbing.

Class (and subclass) + Background can combine in a lot of different ways to express a character. For example, Kainenchen’s primary Aurikesh character, Lanth, is a hard-bitten bounty hunter who has gotten involved in city politics and fey bargains. Excluded from privilege because she was born a veytikka, she has survived the city’s revolution and come out (at least for the time being) on the winning side.

Kainenchen chose to express this character as a Battle Master fighter with the Enforcer background. That’s worked out well, but it was far from the only option. Outlander (she’s from a distant province), Folk Hero (she’s on the run from an evil archmage back at home), Urchin (Feature: City Secrets is super on-point here), and Acolyte (she belongs to a warrior order that is… not entirely not a cult) all could have worked for her early career.

Or she could have picked a different class. Lanth’s fey connections make Oath of the Ancients paladin or Archfey bladelock interesting ways to get there. Swashbuckler, Assassin, Inquisitive, or Thief (in roughly that order, descending) could have been great ways to express something similar with rogue. There’s even an argument to be made for Hunter or Gloom Stalker ranger, or (at the outer extremity) a Kensei monk. Fortunately, the Battle Master playstyle fits her tastes as a player pretty well.

Kainenchen pointed out recently that Lanth hasn’t done any actual bounty hunting in, uh, more than ninety sessions now. Is Enforcer still a good expression of who Lanth is? Given her greatly increased social status, I think there’s a further argument to be made for Folk Hero or Soldier (reflecting her rank as Junior Commandant of the PCs’ mercenary company). Interpreted through a veytikka lens, I could even see labeling her as a Noble – just not with the same social trappings as nobles of other races.

Honestly, if you’re anything less than 100% married to the idea that Background is who you were, players and DMs should take a moment every few levels or sessions or whatever and make sure the features on the page still resemble the characterization presented in play. You’d need to decide what happens with proficiencies and features, of course. Before I get into mechanics, just keep in mind that I’m presenting (for instance) both Soldier -> Noble and Noble -> Noble+ in this post, so bear with me.

There are two ways to leave one Background and take another one.

First, if you’re simply dissatisfied with your Background and you’re suffering buyer’s remorse, talk to the DM. If that doesn’t resolve the problem, then between sessions, change your granted proficiencies and your background feature from your old background to your new one. Remove your old starting equipment and gain your new starting equipment. There won’t be a story justification for any of this, because it’s everyone’s job to go forward with a pure retcon. Buyer’s remorse sucks the fun out of games, and while you’re unlikely to feel that strongly about your Background, 5e won’t break if you let people change up character elements between sessions.

That’s not the kind of Background change I’m here to talk about, but I wanted to be extremely clear about my position on it ahead of time. If you’re the sort of person who would powergame this in some way, please jog on, because you’re abusing your putative DM’s goodwill.

If a character grows and changes so that their Background no longer represents them, choose one benefit of the old background to retain, not including equipment: one skill, one tool proficiency, one language (granted, this would be an odd choice), or background feature. Choose a new background and receive all of its benefits except for starting equipment. You can retain up to one extra proficiency or feature from changing background between 1st and 10th level. Starting at 11th level, you can retain second additional proficiency or feature from changing backgrounds two or more times.

I would suggest that such changes probably come from seismic shifts brought on in the course of the narrative: taking holy orders to become an Acolyte, retreating into the wilderness for an extended downtime to become a Hermit, being knighted to become a Noble (Knight Variant), or the like. Particularly while playing through Ghosts of Saltmarsh, it’s easy to imagine a character with a landlubber background acquiring a ship and learning enough about handling her that they become a Sailor, Pirate, or any number of other options. If your campaign has a significant time jump, changing your Background is a great way to signify that change, if you don’t also want to change your class.

If you’ve spent several levels being an Acolyte and exploring that as part of your story, maybe you should move up in the church’s hierarchy. You don’t really stay an Urchin forever, do you? Not when you’re gaining phenomenal stabbing powers or the sorcerous secrets of the cosmos?

When you complete a significant goal related to your Background, you can advance your Background. This probably doesn’t happen before 5th level, in any case, but I am not the boss of your campaign. Below, I’ve suggested some benefits that you might receive.

A portion of the idea that I’m only lightly touching on is that you might – if it’s what you want to be doing anyway – treat these advances as analogues of 1e/2e “Name Level” – opening the way to strongholds, followers, and even some things not written by Matt Colville. I’ve tried to highlight how this might be applicable within the Acolyte’s options.

By completing one or more significant tasks on behalf of your faith and otherwise maintaining an unblemished reputation, you might become an Inquisitor or a Prelate.

Inquisitors are charged to guard against corruption within the faith. As an Inquisitor, you have the authority to make arrests and interrogate prisoners, and you can call upon much more extensive support from members and temples of your faith.

Furthermore, as an action, you can make a Wisdom (Insight) or Intelligence (Religion) check when speaking to a creature that can understand you and that you think is charmed for at least 1 minute. If your result is equal to or greater than the saving throw DC of the charmed effect, the charmed condition ends. You can use this feature on one creature, and regain the use of it when you finish a short rest.

Prelates form much of the church hierarchy, administering ever-larger groups of the faithful. As a prelate, you have the authority to call upon the aid of up to six acolytes, cultists, cult fanatics, guards, priests, or spies, in any combination, by visiting a temple or other center of your faith.

Furthermore, as an action, you can make a Wisdom (Insight) or Wisdom (Religion) check when speaking to one or more creatures that can understand you for at least 1 minute. Your check is contested by the highest Intelligence (Religion) or Charisma (Deception) roll of the creatures you are addressing. Creatures that lose this contested check find it difficult to lie to you, making Charisma (Deception) rolls against you with disadvantage for the next hour. Creatures that succeed this contested check are immune to your use of this feature for 24 hours.

After pulling off one legendary con or several famous ones, you can choose to become a Masque. (There are other kinds of cool Charlatan concepts that “scale up” to higher-stakes action, such as noble pretenders and the like, but I’m blanking on how to write compelling features around those.)

Masques are legends in the society of charlatans and criminals. As a Masque, you’ve used so many identities that you can develop a new and convincing one in 1 minute, as long as your disguise and forgery kits are available. You know how to read the subconscious cues that people give off about what they expect from your false identity.

Furthermore, if you fail your saving throw against a zone of truth, at the end of each of your turns, you can roll a Charisma (Deception) check with disadvantage. If your check result equals or exceeds the spell’s saving throw DC, you are no longer affected by the zone of truth. The spell’s caster doesn’t sense this change.

Through cutthroat competition or daring heists, you rise through the ranks of criminals – either with a thieves’ guild, or as a solo operator. You might become a guildmaster or an outlaw.

Guildmasters include all of the upper echelons of a guild’s or syndicate’s hierarchy. As a Guildmaster, you can demand a portion of your underlings’ profits each month, generally 20 x your level gold pieces. You have to be in a city where your guild or syndicate is active to receive this money.

Furthermore, you have elevated shifting blame and legal ramifications to a high art. When you fail a Charisma ability check, you can blame someone else and reroll the check using Charisma (Deception), regardless of the original skill used, if any.

Outlaws are solo operators in the criminal underworld, rejecting the hierarchy and security of a thieves’ guild. (Their adventuring companions usually aren’t part of the criminal underworld.) Outlaws regularly run afoul of those guilds, especially when they intrude upon a guild’s territorial claims. When you enter a settlement, you can identify the major players of its official and underworld power structures with 1 hour of work. If these identities are concealed with magic, you don’t learn who they are, but you recognize that something is amiss.

Furthermore, in an urban environment, you come and go like a ghost. When an adversary tries to follow you or discover your location by investigation or tracking, you can contest their ability check with a Dexterity (Stealth) check. You have advantage on any saving throw against a spell that would discern your location when cast by an enemy.

These first few features are my proof-of-concept work. If you like the ideas I’m exploring here, let me know and I’ll continue in a Part Two, in the future. If not, well, let me know that too! Keep in mind everything in this post is intended to be optional, and to give you ways to emphasize character arcs. A character who changes or advances their Background is stronger than a character who doesn’t in such minor ways that I hope to avoid the compulsive bennie-gathering impulse. In this case, that impulse erodes my aim, which is supporting the narrative.

4 thoughts on “Leveling Up Your Background”