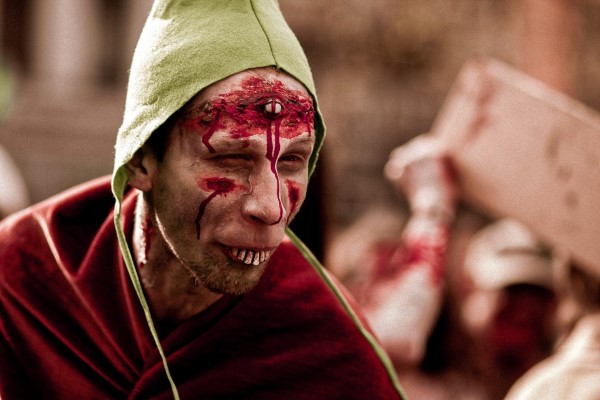 Some time back, I created D&D 5e stats for homunculi – not the tiny bat-winged dudes of D&D tradition, but something more like sapient flesh golems. (I probably don’t have to tell you this – you all read books – but Doctor Homunculus was their creator’s name.) One of the key features of homunculi is their ability to replace pieces of their flesh with parts from other, dead creatures. It’s assumed that they’re doing this reasonably often to counteract normal wear and tear. They experience pain like anyone else, but their Unnatural Spark of Life feature means that getting carved open and having major parts replaced – procedures that would take humans half a year or more of recovery – are fairly trivial matters.

Beyond these ordinary replacements, they can graft in more significant pieces from other creatures, especially non-humanoids. The homunculus’s own vitality suffuses these parts as well, allowing the homunculus to use them comfortably. A bear’s claws, a spider’s spinnerets, the glands that let some monsters spit acid or poison – the homunculus might graft any of these into their flesh. In the LARP version of these rules, a homunculus could only ever have one flesh graft at a time. Late in the game, we also revealed that they could have one soul graft at a time, which is… quite a different thing, and outside the scope of this post, at least.

In principle, flesh grafts behave like magic items that only a homunculus can use (but see below for non-Dust to Dust campaigns). For a 5e adaptation, I’d suggest treating the grafting feature as one free “attunement” slot that can only hold grafts. Homunculi can take on additional grafts by using their normal attunement slots; while grafts aren’t magic items and don’t otherwise act as such, I don’t think it breaks theme to have them clash with attunement to the point of costing an attunement slot. (And you still can’t go past 4 grafts at a time.)

Part of the goal is that you should be on the lookout for greater and greater monsters to take grafts from, so I need to have some scaling mechanics going on here. I’d rather create a tool for creating cool grafts than define a huge number of specific grafts, because there are way more monsters than I care to cover with this one little post.

The Care of the Reaper Man

When you examine the corpse of a monster that has been dead for less than 5 minutes, make a Wisdom (Medicine) check. The DC is 5 + the monster’s CR. If this is the first time you have encountered this monster, reduce the DC by 10. On a success, the monster has a graft that you can cut out of it and use. Work with the DM to determine what the graft is and what it does. (The DC reduction is a blatantly game-mechanical effort to make you more likely to find something cool the first time you see a new monster. I grant that I’m not solving for ultra-high CRs or homunculi that are not proficient in Medicine.)

Alternately, don’t do that and just have grafts be harvestable when it seems like it would be cool. If a homunculus gets 1-2 good chances at a new graft each level, that’s probably plenty. Most grafts aren’t preservable, so discarding or declining a lot of grafts is a normal and expected part of play. Think of it as an encouragement to include more big, memorable monsters in your campaign, especially things that might not be your first idea.

You can add a new graft as part of any short rest with the help of another character, or as part of any long rest without the help of another character. You can remove a graft as part of the same work. A removed graft is destroyed unless it came from a monster that possessed the Legendary Actions feature; grafts from such monsters cross the line into overtly magical items. They aren’t necessarily as powerful as Legendary-rarity magic items, though.

If you are grafting on a natural weapon – claws, horns, a fanged maw, a stinging tail, whatever – its damage is based on the monster’s proficiency bonus, which is derived from its CR. If the graft is part of a pair in the monster’s physiology, you graft both parts of that pair as a single grafting or attunement slot (such as both claws).

In general, these natural weapons can’t be used with Dexterity, but exceptions may be appropriate. One of the potential extra benefits of a weapon graft is a single attack that deals an extra die of damage, and recharges after a short or long rest. Natural weapons with other PC races often grant an attack as a bonus action, but I’m not recommending that here. If you’re sure that’s a direction you want to go, perhaps because another PC in your campaign has such a feature, then I’d probably step the damage die down by one size. Sure, I’m playing it safe here, but the potential for doing crazy things to damage values for specific classes and builds is scary.

If you are grafting on a large patch of hide, such as from a crocodile, gorgon, or dragon, your AC while wearing no other armor is 9 + your Dexterity modifier + the monster’s proficiency bonus (maximum +6). Resistance to a damage type is a typical extra benefit of a hide graft.

If you are grafting on a gland that spits an attack, the baseline version is a ranged weapon attack that deals 1d8 damage of an appropriate type to a creature within 30 feet. This scales up for more powerful creatures:

One of the potential extra benefits of a gland graft is that you can convert the spit into a spray. This is a 15-ft cone effect that forces each creature in the area to make a Dex save (DC 8 + your Constitution bonus + the monster’s proficiency bonus), suffering the attack’s normal damage on failed save and half damage on a success.

What About Other Humanoids?

In general, you can’t get a graft that does anything special from another humanoid or undead. In DtD, this is because those were such common opponents that it would have conceptually trivialized the whole process. Also, our humanoids mostly didn’t have interesting bits to steal. I’m not the boss of you, though. Maybe your campaign has a magically-transformed or mutated group of humanoids, or maybe you’ve decided that the 3.5e Green Star Adept prestige class is your jam. (Some people juggle geese!) In that case, go nuts and treat that corpse or set of corpses as exciting loot!

Even if you’re not using homunculi as a race in your setting, you could still bring in grafting in a limited way. Maybe a PC gets captured by an alchemist or wizard with more curiosity than ethics, or maybe they come into contact with some primordial ooze that changes them. In those cases, you might want to give the character a graft that can’t be replaced, or that requires a side quest of some kind to replace. Permanent monstrous appearance is an unwritten but major drawback to life as a homunculus, and any other humanoid with an obvious graft certainly gets the same treatment. (Or you can just have your heart switched with someone else’s, and have weird feelings about it. That’s still cool and creepy too.)

This gland lets you generate lightning, which you use as a breath weapon. As an action, you can make a ranged weapon attack against a creature within 30 feet, dealing 3d8 lightning damage on a hit.

As a bonus action, you can cause this attack to shock a creature that you hit with it, so that they can’t use reactions until the beginning of your next turn.

As an action, you can project a line of lightning 5 feet wide and 60 feet long from your mouth. Creatures in the area must roll Dexterity saving throws. They suffer 8d6 lightning damage on failed save, or half that on a success. You can use this feature twice, and regain all expended uses when you finish a long rest.

This pair of retractable claws has the golden or white fur that is common to Marrashi war lions. You can use them to make melee weapon attacks that deal 1d6 + your Strength modifier slashing damage on a hit.

When you hit with a claw attack, you can use the wild ferocity of the war lion to deal an additional 1d6 damage. You can use this feature once, and regain all expended uses when you finish a short or long rest.

You gain advantage on all saving throws against the petrified condition, and if you become petrified, you can choose to end the condition on yourself after one hour (or anytime thereafter). You are aware of your surroundings while petrified.

This eye-stalk can be mounted on your shoulder, neck, or any part of your head. As an action, you can fire a death ray at one creature you can see within 60 feet. That creature must roll a Dexterity saving throw (DC 12 + your Constitution modifier), suffering 8d10 necrotic damage on a failed save, or half damage on a success. A creature that is reduced to 0 hit points is dead. You can use your death ray three times, and regain all expended uses of it when you finish a long rest.

As a side note, within DtD canon, a loathsome eye-stalk changes a homunculus a hell of a lot more than the item description suggests – it creates a strong connection between the homunculus and Temaugren, the sole inhabitant of Ultis Telmorgarun. For copyright reasons, Temaugren is absolutely not a beholder, and I am frankly shocked that you would even suggest such a thing. Anyway, Temaugren changes the homunculus to be something other than what it is: more like an independent humanoid race capable of procreation.