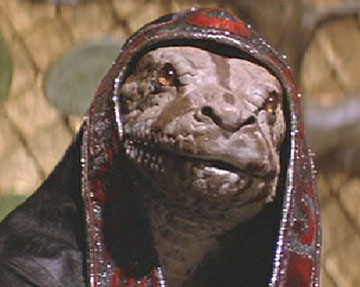 A few months ago, Jeremiah McCoy mentioned wanting a snake-themed roguish archetype, inspired by his long-term King’s Gate character who was a physician and brewer with a bond to the Snake totem. Obviously, barbarians are the class with pre-existing totemic themes, but I wouldn’t be sorry to see totemic themes extended to other classes. Other than Rich Howard’s Alchemist class (which I heartily recommend), a roguish archetype is definitely the best fit for what I wanted to do.

Some rogues swear themselves to strange and squamous gods or dark powers. Others are dedicated to the totemic spirit of the Snake or came into contact with a single drop of blood from the World Serpent. With training, they can develop venom and gain great control over it, as well as other powers common to mythic serpents.

When you choose this archetype at 3rd level, you learn to speak, read, and write Draconic. You can use this language to speak to and understand snakes of all kinds.

Your canines becomes fangs, and you can express venom through them. While you have a weapon or projectile that deals piercing or slashing damage in hand, you can use a bonus action to coat it with venom. The next time you hit a creature with that weapon or projectile, it rolls a Constitution saving throw. On a failed save, it is poisoned until the end of your next turn. You can use this feature once, and regain use of it when you finish a short or long rest.

Also at 3rd level, you gain fine scales over your arms, legs, and torso. You can choose whether these scales also cover your face, neck, hands, and feet. While you are not wearing armor, your AC equals 10 + half your proficiency bonus + your Dexterity modifier.

Further, you gain resistance to poison and advantage on saving throws against the poisoned condition.

Beginning at 9th level, you can shed damaged scales and rapidly heal your wounds. As a bonus action, you can expend a hit die and regain a number of hit points equal to the result plus your Constitution modifier or Charisma modifier (your choice). You can use this feature once, and regain expended uses when you finish a short or long rest.

Further, you regain additional Hit Dice equal to your Constitution modifier or Charisma modifier (your choice) when you finish a long rest.

Starting at 13th level, small doses of your venom can balance out the humors of your patients and quicken their healing. As an action, you can touch yourself or another creature and choose one of the following:

You can use this feature a number of times equal to either your Constitution modifier or Charisma modifier (your choice), and regain all expended uses when you finish a long rest. Constructs and undead can’t be affected by this feature.

Beginning at 17th level, your venom becomes much deadlier. You can use your Serpent’s Maw feature 3 times, and regain all expended uses after 1 minute.

When you use your Serpent’s Maw feature, you deal an additional 4d6 poison damage.

Further, you can also modify your poison to be acidic or neurotoxic, as a bonus action. While your Serpent’s Maw feature is an acidic toxin, your weapon instead deals 4d6 acid damage. While your Serpent’s Maw feature is neurotoxic, your weapon instead deals 2d6 psychic damage, and the creature rolls a Wisdom saving throw. On a failed save, it is paralyzed until the end of your next turn.

Not to put too fine a point on it, but I’ve been struggling with the core mechanic of this subclass for a couple of months now. At first I wanted to use a pool of venom points (per long rest) that they’d expend for poison damage and healing effects. Earlier today I tried something more like Combat Superiority dice (so per short rest). I liked how that looked even less. Don’t get me wrong, I love the crap out of ki points and Battle Masters; it was just too obvious to me that I was being lazy.

It may be weird that they don’t improve their damage output until 17th level, but the poisoned condition is a serious (if short-term) debuff that should help the party a good bit. If I were to change anything about Serpent’s Maw, I’d increase its frequency of use, because some number of misses on a per-short-rest feature means that it’s fairly limited.

Shed Skin is a pretty direct lift from King’s Gate, but also possibly a nice survivability boost for rogues.

Asklepian is all about the mythic meaning of serpents, of course. I hope it’s fun for rogues to offer a “healing received” buff, which they can use on themselves to trigger with their Shed Skin feature or a healing potion.

World Serpent’s Spawn touches on a concept I put into one of my early-early 5e feat designs, where you can turn a poison into a caustic agent or a neurotoxin to get around poison/poisoned immunity. I did also want Serpentkin to deal additional damage, so it shows up here.

My big design question is how much extra damage it’s okay for rogues to derive from their subclass in ways that they can easily, reliably trigger (as compared to the unreliability of Assassin damage boosts). I can imagine retuning World Serpent’s Spawn (and maybe Serpent’s Maw) extensively. If you’re especially wise in the ways of roguish archetype design, talk about it in the comments.

I have a lot of features use either Constitution or Charisma, because I couldn’t justify using Dex. I think either physical resilience and control or mystical connection suit the Serpentkin theme pretty well, but at the same time I get that it’s a little weird. Allowing either of the two options is my half-nod to avoiding multiple attribute dependency. After all, rogues probably want good Con or Cha anyway.