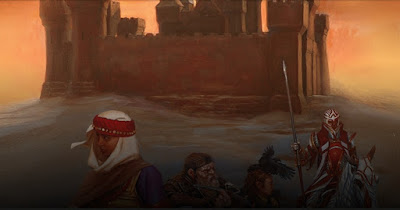 This month’s Unearthed Arcana is another brief one, but to be fair, Mearls has less time around the holidays just like the rest of us. “Kits of Old” looks back to 2e’s kit system to find the gold among the dross. The short version of the result is that I always like Unearthed Arcana – even when I wouldn’t use the material as-written, it never fails to present new ideas into the mix for homebrew designers like me. This time, it’s all about the bard and the fighter.

Bard: the College of Swords

The Complete Bard’s Handbook gave us the Blade kit, for bards who perform weapon tricks and add more Fighter to their fighter/mage/thief class mix. This College likewise mixes more weapon-based fighting into a bard’s gameplay, and winds up making only one significant change from the College of Valor.

This is basically fine, and very good for a carnival performer bard. Its main apparent problem is in its action economy – if you would drop someone with your off-hand attack, you’re interfering with your own ability to use Unnerving Flourish. I am pretty sure they just need to drop the bonus action cost on all Blade Flourish abilities and call it a day. The bonus action cost is there because the core bard feature Bardic Inspiration costs a bonus action to grant its dice, but you can offset that cost by up to 10 minutes, and many bards aren’t as pushed toward two-weapon-fighting as these dudes.

There’s an interesting basis for DtD’s Displaced Hand warrior order here – I would just add bow, crossbow, and other types of thrown weapons to Trick Shooter’s Flourish and call it a day. (Assuming the suggested action-economy change, that is.)

Bard: the College of Satire

So about how the College of Swords is a FIGHTER-mage-rogue? This is a fighter-mage-ROGUE. It riffs on the Jester of 2e, and for that matter the Jester background of the early-ish 5e playtests. I like tricksters and holy fools as much as anyone. I particularly like this write-up’s depiction of the social role of the jester and satirist. They might steal a little too much thunder from the Rogue, though.

This one is a little much, but if Tumbling Fool got trimmed down… a lot… it would be fine. It would also sing its siren song to people who want to show up to games and be the center of attention by making fun of the DM more than engaging with the game, so please observe caution before allowing a player anywhere near this College.

Let’s start by saying that any archetype depending on something you can’t take into a dungeon with you is a problem in D&D. If we were playing Fiends & Field Battles, mounted classes would work a lot better. That said, this is a surprisingly good archetype, and literally the first time I think I have ever liked something called a Cavalier in D&D (once I got past my hopelessly munchkin-y thirteen-year-old tastes, that is – don’t you dare fucking judge me).

I like this a lot – the Champion and Battle Master archetypes have been widely criticized for being playstyles rather than perceptible themes, and this twists the Battle Master playstyle toward a more concrete theme. I like what goes on here, and I would play or allow such a class without reservation. (I don’t say that about Unearthed Arcana subclasses often.) Now, my campaign takes place mostly in places where horses are inconvenient, so I’d have to come up with more chances for the Cavalier to shine, but that would be an acceptable cost.

I’m… not entirely sure why this is here. If you want to play a lightly armored combatant who sneaks around, shouldn’t you be a ranger or a rogue? This is the alt.Ranger for people who want non-spellcasting rangers.

The Scout is the least compelling offering from this document, though its potency (Action Surge, Extra Attack 3, Second Wind) highlights the problems of the core ranger even more. Four attacks in a round, plus an occasional Action Surge, is hilariously better than any tactically-likely Volley that a Hunter could fire off… and it works fine for focusing fire as well as spreading out your attacks. (To put that another way: fix the Hunter by dropping Volley and Whirlwind Attack, and give them Extra Attack 2 instead. It supports melee and ranged, and versatile rangers, in equal measure.)

If this ever gets released, they’ll want to have an official ruling on whether Martial Adept dice can be used on Cavalier and Scout maneuvers. If so, Scouts can be pretty amazing tanks by spending many of their available feats on Martial Adept, and saving their dice to block or mitigate every incoming attack. Of course, if you’re going to do that, you could just play a character that gets resistance to bludgeoning, piercing, and slashing damage almost all the time. You know, a barbarian. (But the Scout would have a fighter’s terrifying number of attacks and Action Surges.)

What I love about this document is how the Bardic Colleges and Fighter Archetypes treat their currencies. Combat Superiority with a tightly themed list is particularly nice, and I can see directing that toward other fighting styles, up to and including quasi-magical styles. I am excited about seeing Blades and Cavaliers after playtesting, in a future release. Less so for Jesters and Scouts, because I expect Jesters to encourage bad player behavior, and Scouts because they’re taking most of the ranger’s distinctive mechanics and theme, and doing it better.

Oh, and for some kits I’d like to see converted: crack open your trusty copy of the Complete Sha’ir’s Handbook. Pick one at random. I don’t know if it’ll be any good, but it will definitely be a new and amazing theme. If you’re looking for more Al-Qadim content, you should be reading Stands-in-Fire right now.