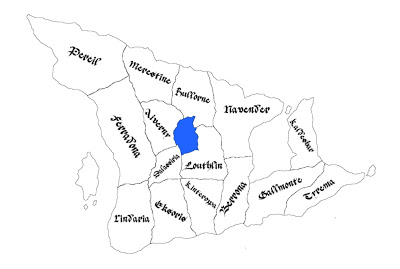 The map below, created in Paint.NET, shows the names and locations of the fifteen domains on the continent of Balioth. Each domain is a separate layer in the initial file, so sometime soon I’ll divide these into their provinces and post them domain-by-domain. At that time, I’ll probably also brainstorm additional details of each individual domains so that those posts aren’t quite as shy on content as this one is going to wind up being.

Since the Black Flag font can be difficult to read at these sizes and angles, I’ve copied the names of each domain below, along with the names the kagandi call them.