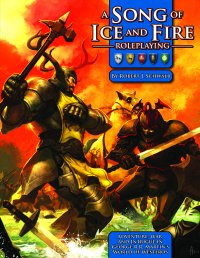 From March of 2009 to March of 2010, the Monkey King ran a campaign of Song of Ice and Fire Roleplaying for a group of six players, eventually expanding to seven. I’m not sure at this point how many sessions we played, but I would guess that it was somewhere between 15 and 20, and the GM MK significantly accelerated our XP gain. As part of character creation, we created House Vervain, named (in my head) for the Vervain Hub in the Vorkosigan Saga… because I’d never heard of vervains before. (Go me.) But it wasn’t the first time that a group of PCs accepted the name that I came up with off the top of my head, simply because it was an idea.
Much like the active and interactive character creation of Technoir, the group involvement in House creation is excellent for getting campaigns started with energy and player investment. The House has stats! I can watch them go up and down! My victories make them go up! (Fortunately, we did not face a lot of losses that would make them go down.) My character, Arden, was the House maester, and I invested in abilities that would improve our Stewardship rolls.
Like many fans of the series, we tied our family in with the Starks, and situated our lands about as far north as the southern edge of the Queen’s Gift allowed. The MK fleshed the area out with both canonical and invented Houses, and over the course of the campaign revealed a deeper backstory for House Vervain that tied us into the Age of Heroes. We had three actual members of House Vervain and three (eventually four) people who worked for the House; the maester I played was (uncharacteristically) actually a member of House Vervain. His story was that Oldtown had made him a maester, but sent him back to his own House in disgrace because of his unseemly interest in magic. The other two House members were the lawful heir and the much more suitable… but illegitimate… son, sort of like if Robb and Jon didn’t really like each other and were wickedly funny about it. Both were archers. The other four PCs were a septa with maxed-out healing ability, a guard captain with Jaime Lannister-level swordsmanship, a Mormont fighter chick who preferred to disarm her opponents at Point A in this handy chart, and (the last to join) a Braavosi mercenary captain who concealed her gender from some-but-not-all members of the group, to endless comedic effect. (She was also Braavosi water dancer and an incredible badass in her own right.)
Discussing these details about those characters brings me to the second thing we loved about the system: PCs start off pretty awesome in this system. I think most of us started with one skill at 5 dice, and several skills in the 3-4 range, though I was not the only person to purchase a Flaw at character creation. (Arden was utterly terrified of Greyjoys and their super evil religion. This was a significant hindrance in the campaign.) Relative to the named characters of the novels, starting PCs seem to be about on par, so it’s just political pull that PC Houses will typically lack in the early going. I don’t require this in games as a general rule, but it feels like the right move here; the protagonists of the novels come across as well-matched for one another, either in direct contests of skill (Jaime and Brienne), or with comparable strengths in different fields (Tyrion and anyone). In Westeros, significant people have typically heard of new characters long before those new characters come on-camera, creating the impression of a widely-dispersed society that is knit together by surprisingly strong bonds of reputation. SIFRP follows this trend by making PCs people who matter from the beginning. Most of us had a skill in which we could not realistically fail, and it was more a question of how unbelievable our success would be. The game has a long enough skill list, however, that we still had significant weak points.

Our group was bound together by ties of blood and sworn service, and because all seven players had known each other for many moons, we quickly fell into comfortable patterns of snark and murmured advice that would have made the game fun with even a terrible rules system. Instead, we had a rules system that, as far as I know, everyone at the table liked. The all-but-ludicrous successes possible with each character’s best skill led to some quips of which I am still proud. “Our septa? She could heal a rare steak,” and “…did you just cure old age?”
Anyway, I don’t mean this commentary to be too laden with anecdotes. One of the problems with playing a maester, though, is that maesters aren’t really protagonists in Westeros. They aren’t supposed to travel, because they’re sworn to the castle that they serve, and they don’t control the forces of magic (but then, neither does anyone else, normally), so the only conflicts in which they take a direct hand are intrigues. Our MK, I’m happy to say, ran several of those, but I had a lot of time to do little more than snark the rest of the party.
I didn’t learn the social-conflict system in as much depth as I really ought to have, but I enjoyed delivering venomous or thundering oratory when called to court before Robb Stark. Composure hit points as parallels of the combat system’s Damage, Injuries, and Wounds mean that the social conflict system has, if nothing else, a sense of progress, rather than turning into one-roll success or failure. There are also a wide variety of skills that can apply to social conflict, but also have other applications. Combined efforts also went over pretty well.
I didn’t personally play with the combat system much at all, aside from one incident of meritorious use of a tapestry to hinder enemies. In a number of tourneys and sparring matches, however, it looked like heavily-armored warriors were evenly matched with unarmored swashbucklers. In a protracted battle, though, it was just as clear that the heavily-armored warrior would fare better. The game accomplishes this through a combination of multiple stat dependency for Defense, armor making characters easier to hit but harder to damage, and the Braavosi and Water Dancer fighting schools. I also like the way the Damage/Injury/Wound system provides three different degrees of consequences for getting hit in combat. It strongly resembles the different degrees of physical consequences characters can suffer in the FATE system, but SIFRP’s system feels more intuitive, as it hides the weirdness of its roll-up system.
Our campaign also included a number of mass combats, another of the high points of the SIFRP system. We fought a rebellious lord who also happened to be a horrible necromancer, we defended a ruined keep in the deep woods from an army that wanted to take it from us, we freed Deepwood Motte from the ironborn, and we defended Winterfell from a second, much larger force of ironborn (the campaign’s climax). These were exciting even for me, as a non-martial character, because I enjoyed controlling a unit of soldiers and granting them a small stat bonus. House Vervain tended to favor a smaller number of elite soldiers, taking orders from our guard captain (playing to his other major strength).
It was, in short, a completely amazing campaign, and it is only because I am spoiled for choice that I can’t instantly declare it the best tabletop game I’ve ever played. There is a lot to like in the rules system, and the game’s engine is absolutely worth adapting to other games, much as Wombat Warlord has done for Birthright. Were I to play in another SIFRP campaign, I would avoid playing a maester, as direct involvement in problem-solving was often not possible, through no fault of the MK’s; maesters simply don’t learn things that are useful to adventurers’ problems. I believe I speak for all of the players and the MK when I say that we would eagerly play SIFRP again.

5 thoughts on “Song of Ice and Fire Roleplaying: Retrospective”