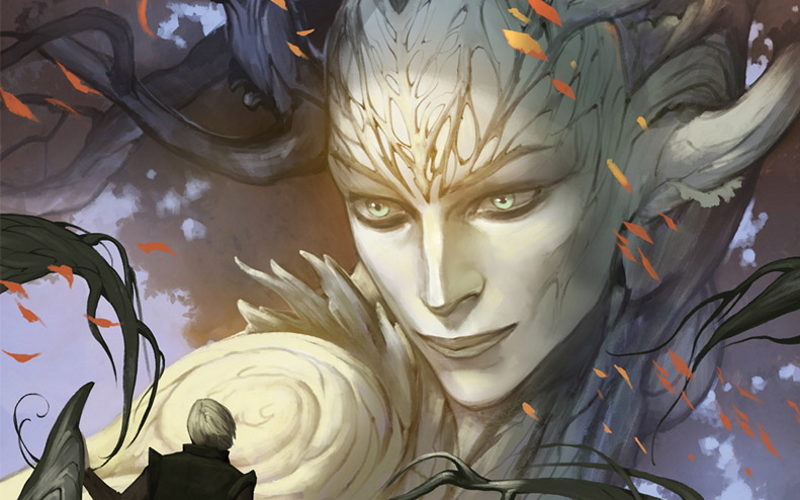 I’ve got significant problems with the existing Archfey patron that I haven’t been shy about. This isn’t even my first effort at overhauling the Archfey! The short version of the issue is that Fey Presence as a one-round charm/fear just… isn’t much. Misty Escape is a great per-short-rest get-out-of-jail-free card. Beguiling Defenses is a super-immunity, which y’all know I hate, and Dark Delirium is another per-short-rest charm/fear power… just as everything is getting charm/fear immunity. Thanks!

The Archfey are lords over lesser fey, the greatest in age, power, and grandeur. To revel in the majesty of their positions, they organize themselves into courts and compete with one another. The Summer Court and Gloaming Court are the most important of these, though the Goblin Court stirs again after countless eons of dormancy.

Okay, while I’m changing stuff, let me suggest that you change the Expanded Spell List feature so that warlocks get those spells known for free. The PH Archfey spell list is actually really good, but I also like my variant that I linked. So I dunno on this one, but if you change nothing from the PH you’re still in good shape.

In this version, I’m trying a Genie-style thing. You gain the spell from All Courts and the spell from your chosen Court. (I would like to tender my apology to everyone reading this table. I don’t know how to fix tables in the new and improved WordPress, and I’m terrified of digging too deep to try to fix it.)

You learn the ways of the Court of your choice. Once you choose a Court, it is difficult to change,.

Summer Graces. You gain proficiency in martial weapons, medium armor, and shields. You can add your Charisma bonus instead of your Strength bonus to attack and damage rolls you make with martial weapons.

Gloaming Graces. You gain proficiency in martial finesse weapons and martial ranged weapons. You can add your Charisma bonus instead of your Dexterity bonus to attack and damage rolls you make with finesse and ranged weapons.

You learn a powerful curse that you can lay on your enemies, depending on your Court. As a bonus action, choose one creature that you can see within 30 feet of you. The target is cursed for 1 minute, and you can extend this duration to a year and a day by expending a Pact Magic spell slot. The curse ends when the target dies. You can’t use this feature again until you finish a short or long rest.

Summer Curse. Your attacks against the target deal additional radiant damage equal to your proficiency bonus. The target has disadvantage on saving throws against the charmed condition.

If the target dies while under the effect of this curse, you gain temporary hit points equal to your warlock level + your Charisma modifier.

Gloaming Curse. Your attacks against the target deal additional psychic damage equal to your proficiency bonus. The target has disadvantage on saving throws against the frightened condition.

If the target dies while under the effect of this curse, you can immediately force up to two other creatures that can see you to make Charisma saving throws against your spell save DC. On a failure, they are frightened of you until the end of your next turn.

Goblin Curse. Your attacks against the target deal additional acid damage equal to your proficiency bonus. The target has disadvantage on saving throws against the poisoned condition.

You have advantage on saving throws against the charmed, frightened, and poisoned conditions.

When you give or receive an object as a gift from another creature, you can also give the creature advantage on saving throws against the charmed, frightened, or poisoned condition for 1 hour. You can use this part of this feature a number of times per long rest equal to your proficiency bonus.

You learn misty step and dimension door if you don’t already know them, and they don’t count against your Spells Known.

When you cast a spell that causes you to teleport, you can choose up to two additional willing creatures within 10 feet of you, or creatures that you are grappling. Those creatures teleport with you. When you reach 14th level, the number of additional creatures you can bring with you increases to four.

As a bonus action, you can take on a more fey appearance and nature. For 1 hour or until you end this transformation as an action, your type becomes fey, and you gain one of the following based on your chosen Court.

Summer Mien. When you activate this mien, you can choose to dispel magical darkness effects created with a spell slot of 5th level or lower. While this mien is active, you gain the following:

Gloaming Mien. When you activate this mien, you can choose to dispel magical light effects created with a spell slot of 5th level or lower. While this mien is active, you gain the following:

Goblin Mien. When you activate this mien, you can choose one spell of 5th level or lower than is currently affecting a creature you can see within 30 feet of you. The creature affected by that spell can roll a Charisma saving throw against your spellcasting DC; on a failure, the spell stops affecting that creature and affects you for the remainder of its duration or until you end this mien. A creature can choose to fail this saving throw. While this mien is active, you gain the following:

The original Archfey patron attempts to cover Summer/Seelie and Gloaming/Unseelie with the charm/fear dualities of Fey Presence and Dark Delirium. I wanted to get deeper into that and turn them into full parallel playstyles, while also aggressively supporting Blade, Chain, and Tome pacts. (We all know that Blade constantly needs our love and support, right?)

Adding Goblin as a third poison-focused playstyle is another stretch goal of this project. It has to differ more from Summer and Gloaming, because poisoned is a debuff rather than a crowd-control and because poison resistance/immunity is so common. (Not that charm/fear immunity aren’t all too common.)

Overall I see this as a blend of the mechanical innovations of the Hexblade and the Genie. If you’re into my take on the fey, I hope you’ll also check out Fey Gifts & Bargains on the DM’s Guild!

Geoffrey asked a number of questions in a comment. The comment arrived in my email but isn’t visible here on Patreon, so I’m adding them in an edit. I haven’t yet made any changes based on these comments – you’re seeing the same version.

I think you’ve made some compelling changes here, and I’m enjoying seeing the evolution of the Pact. Couple things popped to mind on my first read, and apologies if I’m misinterpreting.

Goblin Curse: Working as intended, I love how this could be used to “leap frog” the Goblin’s own poisons to a new target with no save. Any concerns about them opening with it on a very weak (or even sacrificial creature, like the old bag of rats), and then jumping it to a much more powerful/resilient creature?

If you can deal 1d4 damage to an ordinary rat and it survives…? But more to the point, I think that “don’t go for bag-of-rats stuff in my D&D game please” is the answer here. It is intended that you can transfer a poison off of a combatant mook and onto the boss. It’s possible that there’s an ongoing poison so nasty that I’d regret this and wind up changing the feature, of course.

Hidden Pathways: I always feel like I missed something when I hit a class feature if they give me something, but nothing if I already have it (this goes for proficiencies too). It can be especially frustrating since sometimes they are things the player would obviously have made an effort to already acquire, since they probably are in-theme for them.

Warlocks are good at cycling out spells when they gain a level. I might cut this down to only teaching you one spell or the other – since you can only cycle out one spell per level, this ensures that you aren’t stuck with a doubled spell for a level by RAW. In general I agree that there’s a weird area around subclasses granting proficiencies that are, conceptually, more like prereqs for entry.

Goblin Mien: This seems to have a nice versatility in that it could pull a bad effect off an ally, or steal a good one from an enemy, but in the case of the later these will probably require Concentration, so the benefit will be very, very short (if any at all), since “You can end concentration at any time”.

Right, part of the idea here is that stealing concentration spells doesn’t last long (if they’re present to observe that you’ve stolen it), but non-concentration buffs – of which there are a few VERY nice examples – are ideal theft targets.