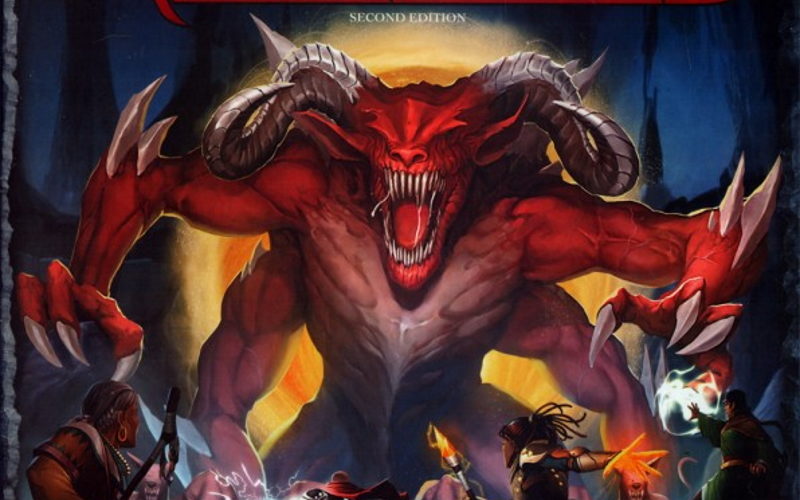 Let me get something out of the way: this isn’t going to be a review, for two reasons. One, I’m so far behind in my review backlog on the tabletop RPG side that I obviously don’t have time to write a review for something in a whole other medium of gaming, don’t be ridiculous. Two, I don’t know if I can be usefully objective about this board game. I don’t play a ton of board games, though we spent Labor Day weekend on nothing else.

What Even is Aeon’s End?

This is a cooperative deck-building game created by Kevin Riley and Action Phase, for 1-4 players. The characters are mages (some of them more warrior-like, some healers, some blasters, and so on) defending the city of Gravehold, the last bastion of humanity against the onslaught of the Nameless – various boss monsters and their minions. One of the game’s core elements is that you don’t shuffle your deck unless an effect specifically tells you to – after the start of play, only the Turn Order deck usually gets shuffled.

The game squeezes a phenomenal amount of tension out of that random Turn Order deck. There are always six cards in this deck, which might be:

What this means is that not only do you sometimes get to act twice in a row… every once in awhile the Nemesis hammers you with four activations in a row and you probably lose the game. Plenty of games use one kind of countdown timer or another – I’ve saved the city of Arkham from the Old Ones a time or two, my friends. Here, minions only act at the beginning of the boss’s turn, and bosses use a lot of powers with a countdown timer of 1-3 turns with a devastating effect if you don’t counter them – which you can only do on your own turn. Some of the most powerful, game-changing effects in the game are the things that make even tiny changes to the turn order.

The Flow of Play

As with… probably all?… deck-builders, there are stacks of cards in the middle of the table, called the supply. You buy these with Aether (the game’s universal currency), add them to your deck, and work on getting your much lesser starting cards out of your deck. The supply always includes three types of gems (the things that improve your Aether budget turn-by-turn), two relics (cool power-up items), and four spells (where the damage comes from). The core box set includes a healthy variety of each, while the many game expansions wildly increase this variety.

The interactions of the mechanics here are subtle and clever, but never confusing, and I am here to tell you, that is a miracle of the design and development process.

For their next miracle, every mage has two or three elements that give them a playstyle all their own. Each gets a unique spell or gem in their starting hand and has a very strong special ability that they probably can’t play until the mid- or late-game. The character card also has slots at the top for their four breaches – the magical rifts that let them cast spells – and those can be in a variety of different positions; for some expansion characters, they’re permanently closed and unusable. That usually signals a particularly unusual rules interaction in their other unique features. The narrative and lore of the characters don’t have a ton of impact, but I am super invested in characters that offer the strong support playstyles that I love.

One other really neat thing that I don’t think I’d seen before this – a lot of the nemesis effects target “any player” or “any player who satisfies a particular requirement.” That lets players volunteer to be the one to have the bad thing happen to them, which is a great moment of building esprit de corps at the table.

The boss monsters have a lot going on, and each one has a fully unique style. The core game box includes four nemeses, and as you’d expect there are at least two more in every expansion. I don’t know what the ‘normal” win rate is for more skilled board gamers than I am, but even against the “easy” one – Rageborne – I lose close to half of all games. The visual and mechanical design for the bosses is just stellar.

What the bosses do have in common is a shared Nemesis deck that you construct at the start of play, with about nine unique cards added to that deck for each boss. These cards are divided into Attacks (instant effects, usually the least severe), Powers (ticking time bombs of destruction), and Minions (ongoing bad things that also soak up damage you’d rather be dealing to the boss).

The boss wins if all of the mages are reduced to 0 health, though you can keep playing in a slightly reduced way after you fall to 0 health. The boss also wins if Gravehold falls to 0 health. The players win if the boss is reduced to 0, or if the Nemesis deck runs out of cards and the boss has no remaining minions or powers.

You do sometimes run into some mild ambiguities in effect interactions from nemesis cards and other mechanics. To its credit the game says up-front that whatever ruling gains table consensus is fine.

I picked up this game in the first place because I was in one of my friendly local gaming stores, the Raven’s Nest in Marietta, and looking for a  new board game. Kainenchen and I can play some kinds of competitive games together, but we tend to greatly prefer cooperative games. I explained this to the store’s staff member, he provided a helpful list of options, and the box art and core pitch sealed the deal.

Kainenchen and I played for the first time on my birthday a few years ago. Shortly after that we started sharing it with anyone who would sit still for a 90-ish-minute first game. At this point I’ve introduced ten people to the game, and that’s led to at least four new sales of the core set. What inevitably happens, every single time, is that we get our teeth kicked in by Rageborne in the first game, and the new players immediately want a rematch because now they see how they could have done it all better.

It’s about the same emotional journey as getting destroyed by a boss in a Soulsbourne game, because in another play or two you’ll take down Ragebourne. This makes you think you’re ready for another boss, which makes God and/or Kevin Riley laugh at your petty hubris.

The other incredibly addicting moment is when you pull off a perfect combo of activating a special ability or two and playing just the right combo of cards to deal around a giant pile of damage in a single round. The fun here is self-explanatory, but learning the combos also delivers on the feeling of skill mastery.

If you’ve never played a tense, difficult co-op game before, give this one a try. There’s also a Steam adaptation that I quite like, though because the physical game was my first experience, I’m attached to that version and narrowly resisting the siren song of grabbing up all of the expansions. Aeon’s End: The New Age and Aeon’s End Legacy are standalone expansions that I’m dying to try out.

I feel some vague obligation to look for problem points in the game.

As previously attested, this isn’t a review, so I’m not giving this game the 9.999…/10 rating it so richly deserves.

Aeon’s End 2nd Edition – obviously the game is available on Amazon too, but I am not linking to Amazon