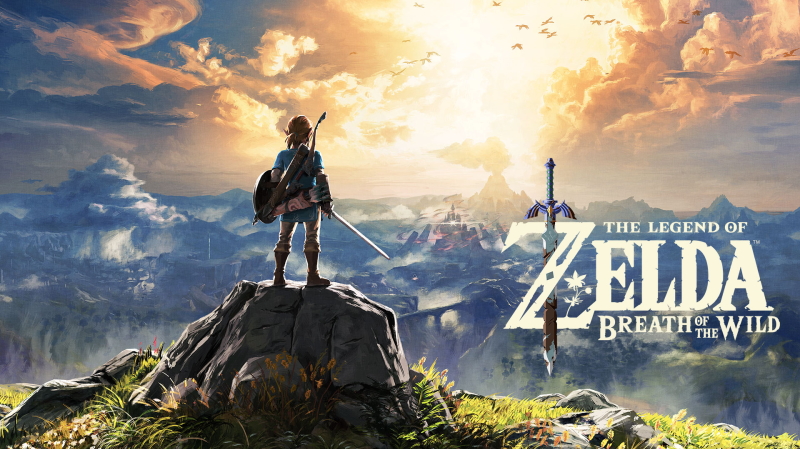 It took me until the quarantine times to do much about the fact that I got a Nintendo Switch for Christmas and dive into Breath of the Wild. In case you started your quarantine and media blackout three years early, Breath of the Wild is a huge open-world game in the Legend of Zelda franchise, and it’s incredibly good. I’m having a good enough time exploring the world that I’m holding off on going after Ganon, because I’m pretty sure I’ll stop playing the game once I beat him. Paradoxical, maybe, but here we are.

Anyway, I think it’s doing some things right that we can borrow into tabletop gaming. Some of these may be poor fits for D&D and better fits for a different game, or a nonexistent, potential game.

There may be spoilers. A sense of surprise and discovery are a wonderful part of the game, so if you want to preserve those for yourself, come back when you’ve finished the game.

Finally – because it came up in a weird context recently – if you hated Breath of the Wild, now is not a constructive time to tell me about it.

In BotW and a lot of games, a huge part of gameplay is exploring the world and gathering resources along the way. I think Ursula K. le Guin’s Carrier Bag Theory of Fiction has a lot to offer here: if there’s combat, if Link fights bokoblins or moblins or whatever, that’s largely incidental to the job of gathering the things he needs to live, and developing his understanding of himself, Zelda, the other Champions, and Ganon. There are fights and bosses, of course – it’s still a video game – but that’s a small slice of gameplay.

D&D has seen some experimental hexcrawl rules that emphasize unusual regional conditions and specify DCs for various actions. I’d like to see a deeper look into… challenges?… around scouting and gathering. I’m not doing that work right here, but it’s something I might put some thought into. It’s a huge support for making a crafting system more interesting and functional than I’ve yet seen in a tabletop game

Link has three armor slots: head, chest, and legs. Within that very simple system, there are quite a lot of armor items in the game, some of which confer further set bonuses. Other than a few very good items being aesthetically questionable (the Ancient Helm knows what it did), the looks are great and varied… even the drag. In most fantasy-adventure tabletop games, a character has one best suit of armor for almost all circumstances, and attention given to the look of that armor varies wildly from table to table.

I don’t expect to see game rules and active design energy poured on the look of each suit of armor – mostly just art budget – though I’m not opposed to the idea, either. What I want is armor and clothing choice linked into the needs of more than just combat gameplay. In real life, we know all about choosing clothing for the social reaction we want to evoke and the exploration (especially terrain and weather) conditions we expect to encounter, even if we’ve never been in a real fight.

The main ways I’ve seen this handled in tabletop games are “don’t wear heavy armor in the heat,” or the armor check penalties of 3.x and 4e. In theory you could have your different resistance suits for each type of energy, plus an adamantium suit if you’re sure it’s going to be nothing but wood and steel. Link can carry an unlimited amount of plate armor – not so for characters in any tabletop game I can think of, at least without adding in a bag of holding.

What if each player described their three main looks: prepared for combat, prepared for exploration, prepared for a fairly ordinary social or investigative encounter. Context can further change up any of those, of course, and it would require some further meat on the bones of social and exploration challenges. It really can be something as simple as “one free reroll per social or exploration encounter if you’re dressed appropriately to the situation,” so that it feels like a bonus for engaging rather than punishment for guessing wrong on a situation.

Don’t worry, I can see the challenges of this on my own, especially in D&D 5e usage where light, medium, and heavy armor are so distinct in how they relate to your stats. (Maybe you want to read my post on medium armor again?) This is me batting ideas around, not offering a polished implementation.

It’s not news that players like having a group asset and building it up. Tarrey Town is an interesting example of that in a single-player game – you not only provide resources to build your town, you also recruit NPCs to live and work there, and they start offering quests of their own. For my money, that last part is the killer app. Objectively, I know how quest chains work. Experiencing it in the game, it feels surprising that talking to a few guys about this house they want to sell leads to building a whole town halfway across the world.

For your game, it’s much more obvious that choices follow on each other, because you don’t have to script it all in quest brains and a very simple conversation parser. One of the things D&D really lacks is robust handling for a wide variety of different group assets. The ship rules of Ghosts of Saltmarsh are good, and I like their procedural content generation support, but they don’t generalize to other kinds of group assets. I haven’t yet gotten a copy of Acquisitions Incorporated, but it’s just as much about building a group asset. Regardless of the form of the asset, something outside your character that you build or maintain, that provides or enables adventures, and that stands as a mark of your achievements is incredibly satisfying.

Link has always been good at spotting a non-load-bearing wall as part of a dungeon renovation plan. In Breath of the Wild, Link can accidentally bring down trees, break vases and other objects, and sometimes even accidentally blow himself off a mountainside. (Uh, not that that has ever happened to me, ahem.) In a lot of fantasy adventure games, characters throw around devastating effects, without damaging the scenery. It would be interesting to see a game – or just a DM’s descriptions – that leaned into collateral damage, from both PCs and NPCs, to demonstrate threat and build tension.

In principle, D&D 3.x supports this by giving hit points and hardness to every material out of which a scene might be constructed, and likewise you could do that in 5e. Pretty sure no one emphasizes it, though. Counting hit points for sections of wall, unless the PCs are actively trying to destroy it, sounds like a miserable job of DMing. Maybe there’s a stripped-down approach that could work. I’m thinking of something 13th Age-adjacent, with “on a roll of [whatever], your attack also damages something nearby.”

Don’t get me wrong, I don’t want to see fireball backdrafts and the player constantly getting screwed by having the temerity to act. This kind of thing takes a sense of balance, fun, and theme. If your game or the scene are heroic in tone, a PC’s collateral effects emphasize how awesome and dangerous they are. Only when you’re going for “magic is dangerous business” or “violence begets horror” should the character’s actions mainly cause them problems or loss.

The narrative stakes of BotW are kind of unusual by tabletop standards, though not for video games. The characters imply that you should hurry to defeat Calamity Ganon, but it’s a big open-world game and if you somehow did hurry to defeat him, you’ve missed most of the fun. Between going from shrine to shrine to earn spirit orbs and the much harder challenges of the DLC, most of your gameplay (assuming you’re not a speedrunner) is trials that make you tougher. Not chasing down smaller bosses to work your way up to Ganon, not hacking your way through monsters for XP. In the narrative, someone you’ll never meet laid down a challenge that is intended to teach Link how to think through his problems or let him practice against the same kinds of constructs that are some of Ganon’s toughest forces.

Then there are the gathering challenges that you pursue in order to level up your armor. Sometimes these are monster parts that you get in the obvious way. Other times the object comes from an unkillable creature, such as a dragon, and it takes planning and timing just to break off a piece of its horn, or a scale, or a claw.

What I’m getting at is that this advancement mechanic is part of the narrative, and based on achievements that the player and character can plan around and pursue. Compare this to XP: in most games, it’s not something understood on an in-character level. It takes extra work to explain your goals without referencing XP. I’d like to see more games try something new.

This is a scattershot collection of interesting things going on in Breath of the Wild, many of them long-time elements of the Legend of Zelda franchise (of which I have played almost none). I hope you’ve found some of the ideas to be interesting alternate ways that a theoretical tabletop game could work, if the idea were part of the game’s initial design goal. And now… back to Hyrule, that poor land ain’t gonna save itself.

One thought on “Five Lessons from Breath of the Wild”