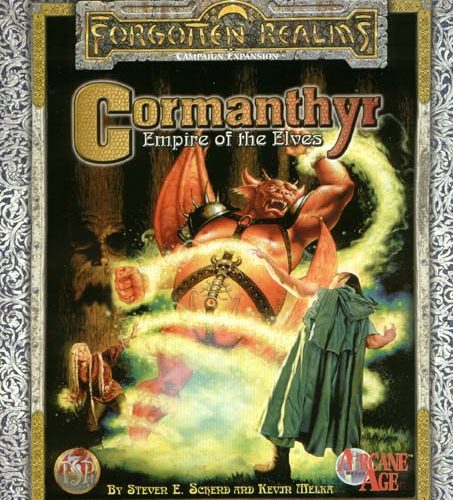 I’ve been talking to Kainenchen a lot lately about the Forgotten Realms canon around surface elves and drow, which has changed a whole lot between the time I first learned it (2e) and now. For a better breakdown of that canon – including trouble spots – check out G.A. Barber’s great work on the topic. In this post, I’m digging into Cormanthyr: Empire of the Elves, part of the 2e Arcane Age line. If you’re unfamiliar, the Arcane Age line explored earlier points in the FR timeline as viable eras for play, from Netheril before Karsus’s Fall to the zenith of Myth Drannor. FR’s extensively detailed history is both interesting and intimidating, so I want to help you, dear reader, pull out interesting parts for your own game.

By the time of present-day Faerun, I think just about all of the elven mythals have gone awry or been corrupted in some way. The one we care about in 5e right now is the “near-mythal” of Undermountain. Halaster’s construction probably works enough like the mythals described in Cormanthyr that we can borrow the rules concepts there, and just make them less reliable. (They’re already unreliable.)

Kainenchen has pointed out that not all readers know what a mythal is, when I treat it like common knowledge. It’s a city-or-larger-sized, indefinite-duration magical working that applies various magical effects to creatures within it, passively or when triggered by various conditions – anything from flying to automatically countering spells within certain parameters.

My suggestion, then, is that you can extend and explore the late-game play of Dungeon of the Mad Mage if there are… well, mainly wizards, but possibly also other spellcasters if you want. (Understand that 2e didn’t have sorcerers or warlocks, and bards were Very Second-Rate Spellcasters, so wizards were the beginning, middle, and end of the story on arcane spellcasting. It was spellbooks and written spells for both bardic and wizardly spellcasting.)

To do this, you’d pick out some of the times that the PCs capture some of the really important spellbooks. Most of those spellbooks come from Halaster’s apprentices, possibly even handed down through multiple apprentices. Those spellbooks hold the spells and high rituals the PCs need to start tinkering with the mythal. Alternately, lean into the sandboxy side of DotMM and have the information inscribed on walls, pillars of obsidian, whatever you’ve got.

Or maybe your party needs a break from this one dungeon. I don’t recommend trying to keep all of the action of a DotMM campaign inside Undermountain – dungeon fatigue is real. If you want to get them involved in mythal tinkering, maybe you send them on a trip to the other side of the Anauroch, to find the secret hideaway of the Srinshee. She was a high (sun? moon? sources vary) elf who led the crafting of the mythal at Myth Drannor. There’s a huge amount of 4e-era canon around her death, but all you really need to know is that she probably had a collection of 1200-year-old notes somewhere that the PCs could discover. Maybe this is all part of tracking down and dealing with one of Halaster’s apprentices who isn’t in Undermountain at the time of the adventure. It could be a chase to prevent another of the apprentices from finding the elven High Magic lore necessary to fix some of the major flaws in Halaster’s work.

There are a lot of drow to be found in Undermountain as well. If the PCs wind up talking to the drow extensively, you’ll want to be well-prepared for them to present their own viewpoint. All the more so if there are surface elves in the party. On one hand, drow are written to be deeply cruel, treacherous, and simply Eeeevil; on the other, a casual read of Cormanthyr leaves one with the impression that maaaaybe Lloth had a point.

But I digress. The key thing to understand is that from the drow perspective, Araushnee/Lloth’s betrayal of Corellon was essentially justified by the war crime that the high elves may or may not have carried out against Miyeritar during the Crown Wars. The Dark Disaster is roughly the drow equivalent of the Mourning of Cyre in Eberron lore. The thing to understand about elves (definitely drow, moon, and sun elves; presumably others as well) is the same as what my (English-born) Irish Poetry professor in college said of the Irish – that history had collapsed on the present. Things that happened ten lifetimes ago are as immediate and important to them as things that happened last night. They hold a grudge just fine, thank you.

To this end, any powerful surface-elf spellcaster that the NPC drow can recognize as such should probably get called “vyshaan.” It’s a slur associating them with the Vyshaantar clan, who the Ilythiiri (drow) accused of performing the blasphemous magic of the Dark Disaster.

If you want to go deeper with this, maybe something the PCs find in the dungeon reveals new truths about who committed the Dark Disaster and why. After all, Waterdeep was once Aelinthaldaar, the capital of the elven realm of Illefarn, and Illefarn was a friend to the Ilythiiri some 1,300 years before the Dark Disaster. If the Secret History were going to survive anywhere, why not here?

Look, there’s nothing all that revolutionary about the idea of shrinking someone down to fit inside a bottle, and having the bottle keep them alive for a long time. The description calls out that it’s inspired by djinni-bottles, but also Action Comics did that back in #242, in July of 1958, but with a whole city rather than a single person. Anyway, I think it’s a great chance to throw in another talky NPC, maybe one connected to an elf or half-elf PC’s family. The magic to create new Anyllan’s bottles survives through at least 650 DR. In 658 DR, according to the Grand History of the Realms, Halaster is raiding Cormanthyr and abducting elven mages, using a portal. You could use this tidbit as the justification for basically any connection to Cormanthyr: Empire of the Elves that amused you.

An archmage, matron, or black-sheep youngest child of an elven clan from more than 800 years ago could be a great source of credible information on Halaster personally; on the history of Illefarn, Aelinthaldaar, or the Melairkyn dwarves (because why not); or any number of other interesting and useful topics. I’d probably say that the trapped elf was in reverie rather than conscious observation, just to avoid the NPC answering PC questions about 800+ years of observing everything in the room (I mean, unless you’re into that). The rest of the adventure here springs out of where you place the portal between Undermountain and Cormanthyr, and what the PCs have to do to get it working again. I’d assume you’d want to put it about one dungeon level lower than wherever you placed the bottle.

As a further note on that, the portal from Cormanthyr was originally opened in secret by elves of the Guild of Naturalists, so the Wyllowwood might be the most compelling place to put it.

I hope you’ll find something interesting in the bits and pieces I’ve pulled out of the text and tried to contextualize above. There may be errors in my presentation of FR canon – after all, it has changed over the 21 years since this book was published.

Also, I would love it if someone tweaked the perspective of this text to make it a fire-breathing critique of white supremacy. It shouldn’t be that big of a shift – the surface elves act like the arbiters of personhood (Tel’Qessir status), initially denying what they have no authority to deny, and gradually expanding it for those who work twice as hard to get half as much. Some individual elves are presented in a good light, but surface elves as a whole? Oh, no. No indeed. They are awful, awful people, and the fact that they’re in a war with the drow that has no way to end is not helping.