Home » 5e DnD » Design Diary: In the Company of Giants 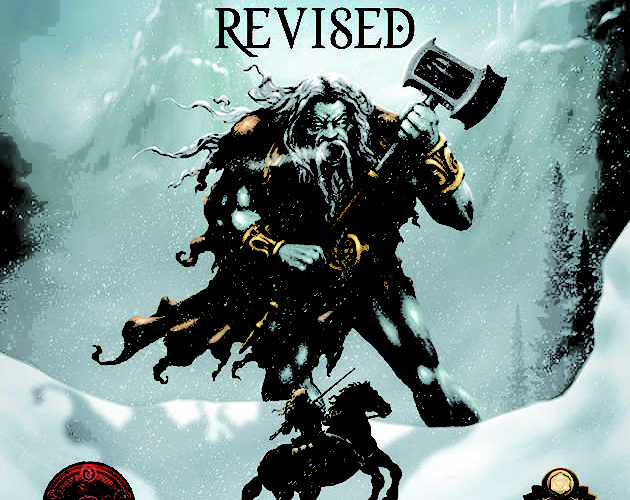 Sure, In the Company of Giants (5th edition, Revised) has been out for nine months and I’m just now getting around to writing a design diary. Today I’m going to talk about it a bit. The first thing to understand is that I was hired to write a revision of an earlier translation of the Pathfinder product into 5e. The first 5e version stayed much closer to the PF original, but there’s an incredible gulf of design style between PF and 5e that made this a rocky proposition.

My goal, then, was to go as far as possible in embracing the fiction of being a giant. There are obvious problems, starting with just how good it is to be Large or Huge, and proceeding directly into how bad it is to be Large or Huge. I was also trying to balance using the Questhaven lore of giants – Questhaven is one of the unique throughlines of Rite Publishing’s work – and keeping the door wide open for tables using core D&D lore of giants. As it happens, they aren’t the same, but they also aren’t in any overt conflict either. The big change is that Questhaven has four flavors of “true” giants, plus trolls and ettins, while D&D has the hill, stone, fire, frost, storm, and cloud giants that we know and love. (Okay, yes, D&D also has trolls and ettins, but supporting those was a lower priority for me.

With the re’em of In the Company of Unicorns, I could maintain the fiction that all unicorns were of the same species, but not the same stats. With giants – even ignoring the six types – I couldn’t do that, for two Large reasons. First, support for Large and Huge characters is cordoned off to the jotun paragon class. I do what I can as a designer, but making Large (bipedal) size okay for all of the core classes is far beyond my powers. So I need a race that starts out Medium, exactly as giants canonically don’t (playing “kid” giants has a set of problems I didn’t want to touch). It followed, then, that you play a Medium race, called jotuns, that can develop into any of the six giantish lineages.

Mechanically, I wanted to make sure they were as different as I could reasonably make them from goliaths, while still covering a lot of the same themes. I leaned more into the social angle of being part of a greater society of giants, and expressed their extraordinary resistance to harm and enemy physical maneuvers differently. Renaming was all I could do to get around needing a Powerful Build feature, though. I mean, it’s just what you do. With a fair bit of hindsight, I might not give them two skill proficiencies – I would probably make it a choose-one-out-of-several. It’s okay either way, in my view.

Most of the class and subclass features probably don’t need a ton of explanation for how the mechanics connect to the story of being a giant, but I spend enough time writing design breakdowns that I should probably turn that lens on my own work from time to time.

That’s the core of the class. It’s about getting huge and beating things over the head. I started with the barbarian, on the idea that it had the most in common both mechanically and thematically, and tinkered from there. Maybe ironically, the jotun paragon gets more offensive help, while the barbarian gets more defensive help (resistance to B/P/S is just unbelievably strong, any way you slice it).

This is where I drill down into much more specific stories of what it’s like to be each type of giant. Fortunately, I had the 5e Monster Manual and Volo’s Guide to Monsters, and the 2e Forgotten Realms Giantcraft, as springboards for what each lineage’s story was about. With 4-5 features per lineage, though, I couldn’t stop at supporting the baseline MM giant of that type, and the VGtM giants of each type are… only intermittently PC-concept-friendly. Giantcraft is a mixed bag on its own merits, mechanically speaking (as with all 2e FR splatbook-adjacent books), but the text super cares about getting in the giants’ heads, and I love it for that.

I went for a rogue/trickster concept here, as well as emphasizing that they live in and walk on clouds. It’s a shame that I didn’t figure out a way to incorporate magic beans. They play with elevation a lot more than most, and they’re hard to pin down outdoors. The whole trickster nature finally delivers with Cloud Duplicate at 18th level. Adding Sneak Attack dice to a big-bruiser class had to wait until high levels, you know?

Writing “the crafter subclass” for any class is tricky, but always interesting to me. Fire giants have always been one of the best-developed lineages, in terms of having a lot of different things going on. Smithing, heavy armor, control over dragons, how to talk to your kids about Surtr…

I struggled a lot with the exact functions of Scion of the Flame and Wyrm-Scather. I don’t remember all of the twists and turns in their design, but I’m pretty sure it was a mess until Dan came along and helped me clarify my thinking.

One of the big things with frost giants in Giantcraft is their rune magic, which is more developed than the magic of other lineages. I didn’t want to go all the way into making them a caster variant of a bruiser class, because melee/casting hybrid (sub)classes are so hard to get right. Instead, their higher-end features emphasize that they are horrible, terrifying ice monsters – freezing their enemies solid and breathing out modified cones of cold.

Massaging this concept to the point that it’s even intelligent enough to go on adventures took a little doing, but making them scary is easy. They want to eat your face and knock the building down around their own ears and they hate it when puny human do tricky thing. This is the Incredibly Hungry Hulk. I’m… obliquely amused that Bonegnawer interacts with Slumbering Giant to make hill giants a little lazier (because they’re regaining expended Hit Dice, and thus getting fewer temporary hit points from Slumbering Giant). I don’t often choose to play Hulk-like characters, but I feel like I’d be willing to give this one a shot.

I leaned real hard on stone giants as the mysterious, weird ones. I love the idea that for them, the surface world is as bizarre and fictional as Wonderland is for Alice. That’s asserted in the text without explicit support, so I gave them Uncanny Dodge, more or less. They can also go entirely defensive, because when a stone giant wants to be incredibly resilient, well, stone.

This is the one lineage where I’m not sure I hit my mark, and Endzeitgeist’s otherwise-very-favorable review takes me to task for it. I made them particularly focused on spellcasting, because that’s what I was getting from VGtM’s entry, and it comes off looking like I just didn’t try hard enough. Within the lore, storm giants are the most unsuited to lives of adventure – they want to be left alone, and they wield a lot of force to back that up. They combine that with being in charge and having no interest in exercising that authority. Not a lot to work with here! But still, if I had it to do over again, I’d probably explore more movement or wisdom features to go along with cool lightning powers.

I hope you’ve enjoyed this exploration of my design thinking in In the Company of Giants. If you haven’t picked up a copy yet, I hope I’ve piqued five dollars and ninety-nine cents worth of interest in you.

(Also, here’s a link to Jared Rascher’s very kind words on it.)