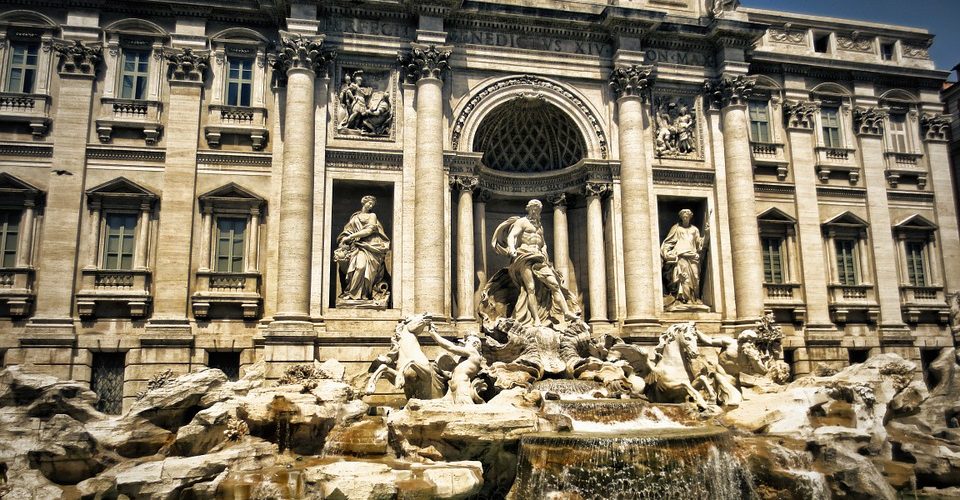 Sure, my last post was about my anniversary… and now it has been five years since our honeymoon. We went to Venice and Rome, we had the time of our lives, and our room at the Hotel Fontana in the Eternal City had the most mind-bogglingly good view: the Trevi Fountain, which all but fills your field of view when you look out the hotel room window. In fairness, every room in the Hotel Fontana has the same view, it’s presumably why they named the hotel that.

If you’re anything like me, you’ve played at least your share of city-construction games, like the Caesar franchise. As a result, you know that city-builders have to concern themselves with lots of subtle variables to make their residents happy, and fountains tend to do that well. To bring that into D&D, then, you’d naturally give the fountain a magical effect of some kind. D&D has a long history of magical fountains, of course, but if there’s going to be a magic item right in the middle of the city, you probably want its magic to stay subtle. A magical healing fountain in the middle of a major city could be good speculative fiction to explore, but it would certainly have a lot of effects on gameplay that you might prefer to avoid.

Alternately, you have to do something special to get the fountain’s powers to work on you. Payment or sacrifice of some kind? That has effects on gameplay, but ones that are probably a lot more manageable. Here are a few ideas.

Water unites the city’s present with its past, and those who listen to the rushing and burbling of the fountain might hear echoes of times long gone. If you spend an hour or more by a memory fountain, roll a DC 20 Intelligence (History) or Wisdom (Insight) check. If you cast a gold coin over your left shoulder into the fountain using your right hand, you can also add your Charisma bonus to this check (minimum +1). If you succeed, you receive the effects of a locate object spell, except that the object does not have to be familiar to you and can be up to 2,000 feet away from you.

If you or anyone closely connected to you removes your coin from the fountain, you can never again benefit from that memory fountain, and when you spend an hour or more near that fountain, its sound affects you with vicious mockery (DC 15, 3d4 psychic damage).

The sound of waters soothes strong emotion, including magical influences, making founts of tranquility useful to both good-hearted city-builders and tyrants keeping a discontented populace in line. If you can hear the sound of the fountain for 10 minutes or more, roll a DC 13 Wisdom saving throw. On a failed save, the fountain casts calm emotions on you. It suppresses any charmed or frightened effect, if one is present; if not, it applies the spell’s alternate effect. This effect is subtle, and you do not recognize that you have been affected unless you have cast at least 1 silver piece or more in total value into the fountain during that time.

Grand fountains are significant social hubs at all times of day or night, and a whisperwater can let two people who visit at different times of day communicate in private. If you spend 15 minutes or more by a fountain and cast in a silver coin while whispering a person’s name, you can cast magic mouth on the fountain, with the person you name as the trigger. Only that person hears the magic mouth speak.

The coin you cast into the fountain replaces somatic and material components of the spell, and is consumed in the casting.