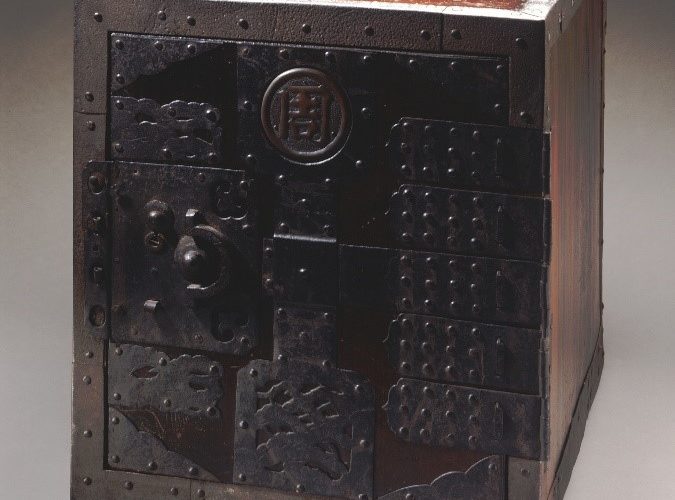 I don’t think I’m going too far afield to say that a closed box is one of the the great symbols of adventure. Two others that spring to mind are a map and a closed door. This image is Sea Chest, with the alternate title Funadansu, from the Los Angeles County Museum of Art collection. For today’s Photo Friday (I did say it was going to be intermittent, right?), I’m going to suggest three different things that could be inside this sea chest, whether as treasure or as the hook for a new adventure.

The PCs find this chest at the end of exploring a shipwreck, maybe one where they’re on the clock and racing against the return of the tides, or maybe one where they’re racing against the duration of their water breathing spell. In any case, it’s no great stretch for the sea chest to come from the sea. Spices are worth such care and protection, and… this is the first time I’ve looked up the price of saffron in the 5e Player’s Handbook. 15 gp, you say? The same as an ox, or a longsword? Pull the other one, it has got bells on. The next step up in price of trade goods is platinum, priced at 500 gp per pound. That might be a bit high, if you let present-day prices guide you (platinum is a touch north of $1500 per ounce, and saffron’s low-end wholesale price is tossed off as $500 per pound), so for easy napkin math, let’s go with 250 gp per pound of saffron.

Me, get dragged way off topic? Perish the thought.

Anyway, figure your players out. Are they going to enjoy the verisimilitude of a phenomenal treasure that they need to do a little legwork to sell for what it could fetch, or are they going to find the whole thing tedious? One of their best uses might be handing the whole thing over to a king or emperor to enhance the opulence of the court, and just enjoying royal favor for a good long time thereafter.

If those aren’t the kinds of players that you have, you can get a comparable high-density, fragile value by browsing the potions or scrolls of the DMG. For that matter, if “ship’s wizard” is a concept that fits your setting, a sea chest like this is a great place to store something as vulnerable to water as a grimoire.

Another thing that a ship’s captain might plausibly store in a stout sea chest like this one is the ship’s log. This takes a good bit of extra session prep to do well (because mysteries require more planning than other kinds of adventures). Send the players to the shipwreck in the first place with the goal of finding out why it sank. Maybe they have a rich aunt who invested in the ship, or maybe the first mate survived and is on trial for malfeasance, following an accusation from a disgruntled crewman. Something in the ship’s log can answer these questions, but in a way that requires further exploration and investigation. For example, maybe the ship’s log confirms that the helmsman was relieved of duty shortly before everything went to hell, but offers only some oblique hints as to why. The PCs then have to find the captain’s body and cast speak with dead, or have to find the helmsman’s significant other and ask some hard questions.

Mysterious cargo that creates a big plot twist once it’s revealed is a fine tradition in storytelling. If you haven’t seen Firefly, it’s, um. It’s a thing. (Pretty sure the expiration date has passed on its spoiler warnings.) This chest is a bit small for a person, unless we’re talking about an infant held in stasis, but there are plenty of other disturbing twists out there.