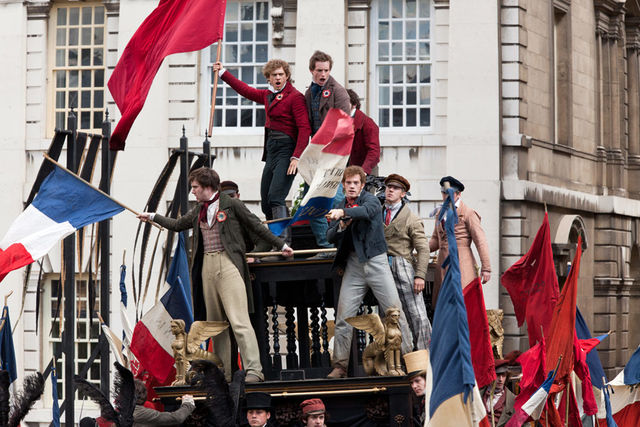 The Aurikesh campaign is set in an early-colonial period, and revolution of various kinds (political, technological, cosmic) is a central theme. Several existing backgrounds touch on ideas of overthrowing the established order and expressions of zeal – the Acolyte, the Criminal, the Folk Hero, and the Hermit all come to mind. For the Revolutionary, though, I wanted to more closely model characters from history and media, even revolutions much later in relative world history than Aurikesh. Hamilton, Les Miserables, A Place of Greater Safety, and The Man Who Was Thursday (uh, one of these things is not like the other) are all inspirations here, as well as whatever history I can call to mind. (I haven’t done in-depth research here – impressionism is the order of the day.)

You struggle to overthrow what you see as a corrupt order. Your cause might be a radical, reactionary, nationalist, anarchist, or religious revolution – whatever your aims, you prepare yourself every day to fight and possibly die for the sake of the revolution. This puts you in deadly opposition to the established order and “decent” society. For some revolutionaries, there is an endpoint at which they could set down their banner and live in peace. Many find no peace after their victory, as a result of the compromises that victory requires, and continue the cause of the revolution or come to a messy end at the hands of those they put into power. This is not the life for those who prefer to sleep in comfortable beds – revolutionaries spends many nights on the move or in hiding.

When you choose this background, work with your DM to establish your cause and any network of support you may have.

Skill Proficiencies: Persuasion, Survival
Tool Proficiencies: One musical instrument
Languages: One of your choice
Equipment: 3 vials of alchemist’s fire, a set of common clothes, a book or pamphlet explaining your revolutionary cause, a belt pouch containing 10 gp

What cause have you chosen to spend your life fighting for?

Feature: Hardened Against Privation
Long hours and desperate circumstances have been your life and your training, and many nights you’ve had nothing to feed you but the fire in your belly. You can survive indefinitely on half rations, and can go an additional 3 days without food before suffering noticeable ill effects. When you undertake a forced march, you can march an additional 4 hours before you need to make saving throws to avoid exhaustion. At any appropriate time during play, you may exchange this feature for the Alternate Feature, below.

Alternate Feature: Disillusionment
In the course of bringing about the revolution, you became disillusioned. Your passion for the cause is not what it was, though in time that flame could be ignited once again. You recall the hard-earned lessons that kept you alive, but you have lost the zeal that swayed others to your cause. Many of your personality features become the inverse of those shown below. You gain proficiency in Insight rather than Persuasion. You can pass as a loyal adherent to your old cause. If your rejection of revolutionary principles is revealed, however, you will be treated as an enemy of the revolution and (in many cases) executed. At any appropriate time during play, you may exchange this feature for the standard Feature, above.

Huh, I’ve gotten a lot more practice at writing personality features since the first time I created a background. I feel reasonably good about these, though I’m open to suggestions on how to refine the text of each.

The switching back and forth between features is weird, compared to other backgrounds, but I wanted to capture the dynamic of revolutions that self-destruct or burn out their zealots. Disillusionment is only really useful when your former cause become your foes, but sacrificing a feature – any feature – suggests to me the trauma necessary to cause someone to turn away from all that they had believed in. Characters can switch back and forth, but I would strongly encourage players to only do so when it’s authentic to the story.

Looking at other D&D settings, I would suggest that this is a no-brainer for Planescape and Eberron, and for the most technologically advanced Domains of Dread. It fits into most other settings only in narrow ways, though I would personally find it awesome to run a short campaign in a major city of Cerilia about revolution against monarchy.

Working on this also made me think about writing a Revolutionary or Partisan class or subclass. We’ll see if I ever go anywhere with that.

3 thoughts on “New Background: The Revolutionary”