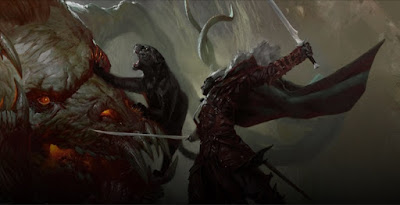 I’m a little late to the party on this, but at the beginning of this month, WotC released a new Unearthed Arcana, with subclasses and fighting styles particularly targeted at Underdark campaigns. The good news is, nothing in them requires the Underdark – their conditions just come up more often there. Let’s see what they’ve given us here.

First off, we have two new fighting styles, Close Quarters Shooter and Tunnel Fighter. Close Quarters Shooter is one-third of the Sharpshooter feat plus one-third of the Crossbow Expert feat (the really important part) plus half of the Archery fighting style. Um… wow. It’s probably fair to say that other Fighting Styles are about on par with a feat, but this is the first one that feels like a feat because of its many moving parts. There’s no question that this is desirable for every ranged weapon wielder, until and unless they spend feats to pick up the rest of Sharpshooter and Crossbow Expert. The other Fighting Styles synergize with feats, rather than overlap. I would hope that DMs keep this in mind and allow players to respend Fighting Styles that no longer have a function. It’s interesting that paladins get Close Quarters Shooter as an option, but not Archery.

Minor note: The attack bonus from CQS applies more broadly than the bonus from Archery, because “+2 bonus to attack rolls you make with ranged weapons” requires the weapon to be categorized as Ranged, as compared to “+1 bonus to attack rolls on ranged attacks.” Definitions have technical meanings; the Thrown property allows melee weapons to make ranged attacks, but does not make them ranged weapons. Houseruling Archery to apply to thrown weapons won’t hurt anyone, though.

Another minor note: If you want to fight with a net, Close Quarters Shooting is a great way to make it viable… since otherwise net attacks always have disadvantage, unless you solve for it with Crossbow Expert.

The only constraint here is the increased demand on your bonus actions – you can’t both be in defensive stance and attacking with the haft of the polearm, which was previously the more desirable half of Polearm Master’s power. Thematically, it seems odd to me for polearms to be the best combination with Tunnel Fighting. My main objection is that polearms didn’t need more help. Also, good Lord, this thing is overpowered in combination with the Sentinel feat, because it solves for the one limitation on Sentinel’s egregiousness (one opportunity attack per round). It touches on some of the same fighting-style concept as the Protection style, but without the shortcomings of Protection.

I don’t want to suggest that this Deep Stalker is meant for any particular ranger. Certainly not their #1 headlining Forgotten Realms character. (If, like every non-traitorous citizen of Alpha Complex, you’ve been reading my Ranger series on Tribality, this commentary is going to look real familiar.)

I like the Deep Stalker pretty well, overall. It communicates its combat approach clearly and with malice aforethought, while cleaving tightly to theme. If Stalker’s Flurry gave a 1d6 or 1d8 damage boost to the follow-up attack, it would be about perfect to me, but I’m stuck on feeling like rangers don’t deal enough damage.

A more sinister sorcerous origin was just a matter of time, and some fan works have already plumbed this idea. Unearthed Arcana’s version emphasizes the disturbing nature of a Shadowfell-linked sorcerer with a table of 1d6 Quirks, which are a nice touch. I would hope that DMs of Shadow sorcerers really enjoy emphasizing the character’s quirk, possibly even granting it a meaningful game effect every now and again.

Beyond that, the Shadow origin grants:

The shadow sorcerer really needs a few more darkness- and necromancy-linked spells added to the sorcerer spell list to feel right. I get that they didn’t like how the bonus spells of the playtest Storm Sorcerer worked out, but there are lots of storm-themed spells for sorcerers. Shadow and creepy-pasta, not so much. Other than that, I think Eyes of the Dark is probably too good, but the origin as a whole is very stylish.

Okay, first off, I can’t stand the thematic content here. I know that some people are happy to see a non-sinister warlock, but to get to a non-sinister warlock you need to rework almost their entire spell list, and every last one of their Invocations. I also don’t like that the patron is cosmic force (the Positive Plane) rather than an entity – a huge part of what makes warlocks interesting is that you can have a relationship (good, bad, or indifferent) with your patron. The story of Undying Light warlocks sounds like it’s intended for a sorcerer instead. Sure, you can change every word of it for your own campaign, but that doesn’t render this section immune to criticism.

My own story-side solution is simple. Pick one: your patron stole celestial fire from the gods and gave it to man; your patron was the proudest of the angels, glorious and doomed; your patron is a gnostic demiurge. But without something to contend with, the warlock just makes no sense to me.

The Undying Light warlock gets Quirks too, themed around maniacal devotion to light and the sun, and fear of the dark. It makes the warlock still less creepy, and more psychologically fragile. Other than item 4, destroying the undead, these are all basically the same flaw, though item 3 is the more active expression. Anyway, give these a pass or write your own, unless the whole table is going to enjoy watching your warlock have a nervous breakdown whenever you’re in total darkness – all the more hellish in an Underdark campaign.
The patron’s actual features:

The Undying Light patron needs more cosmological meaning and interest on the story side. The mechanics are fine, even if they feel like a warlock shopping at the cleric store. If nothing else, I like seeing new content that doesn’t stay within the lines of things that have been established and retreaded from prior editions.
Also, they need to change the patron name so that it doesn’t step on the toes of the already-in-print Undying patron, from the Sword Coast Adventurer’s Guide.

There’s nothing really crazypants in this playtest document. I’m probably more concerned about the Fighting Styles than anything else here, because they affect the greatest number of classes and interact with feats, sometimes oddly. Also, Tunnel Fighter with one or both of Polearm Master and Sentinel is just out of control – near-total stickiness covering either a 15-foot square (no reach weapon) or a 25-foot square (with reach weapon). The Shadow sorcerer is the one I’m most interested in playing, as the Deep Stalker feels too-cool-for-school to me, and I’ve explained my issues with the Undying Light theme.