Home » board games » Don’t Turn Your Back: After One Game 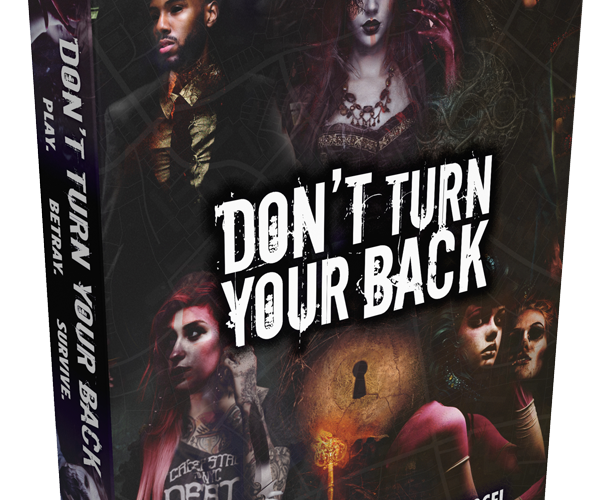 I was a Kickstarter backer for Don’t Turn Your Back, a new board game from Evil Hat. It arrived very shortly before Dragon*Con, so Kainenchen and I took it with us, in case we had a few hours to kill in our hotel room. I’m already a fan of Don’t Rest Your Head, as I described from the session that Samhaine ran for us some years ago. We explored the setting of the Mad City somewhat in that game, but not enough for me to know it well in coming to DTYB.
Now, DTYB is a deck-building game, and the sum total of my previous exposure to deck-builders has been the Facebook version of Thunderstone and the mobile and physical versions of Quarriors! As it happens, I really liked the latter. The former was fine, but the interaction of a human opponent would have been better for me. The point, though, is that I am no veteran of deck-building games, but I have a loose grasp of the most basic elements – start with some rather forgettable cards, work your way up to powerful cards by purchase over the course of play, and dump the weaker cards so that your deck is a lean, mean murderbeast… whatever that means in that game’s particular context. It’s a pretty popular subgenre.
K and I took the plastic-wrap off this game at, uh… maybe midnight? 1 a.m.? on the last night of Dragon*Con. Our reading comprehension skills were at rather less than 100%. There may have been alcohol involved. All of which is to say that we were briefly perplexed by the rules, since we were trying to absorb them and each piece of the game at the same time. Finally we decided to start playing without understanding the whole thing. With a lot of board games (hi, Fantasy Flight! Love you guys, but you’re guilty as hell of this) this doesn’t work and leads to hours of correcting setup errors.

Don’t Turn Your Back taught us to play it from the moment we finished setup, and I regard this as a huge element of praise for the game. Once we started just… going, everything came together and became self-explanatory. From that point onward, we could focus on learning our cards and analyzing options, because there are a lot of compelling options.
There’s a lot to like about the structure of those options and the ways that normally-suboptimal choices can gain an edge-case advantage. I like that I had to take my decision-making tree from the top with every round of gameplay. While I am sure I would get my ass beat by someone more experienced in this game and games like it, I felt like I could make pretty good decisions the first time out, because there’s such clarity in what you stand to gain and what you risk with each choice. What I’m trying to say is that the core gameplay loop felt great.
Even in a two-player game, there’s a lot of jockeying for position on the board, because each round has only so many spaces in each game location, where the players place cards to exert their influence. I recall similar mechanics in two of my other favorite games, Chaos in the Old World and Lords of Waterdeep. and it has a great effect here. In any given round, the competition might be for any of the areas of the Mad City, but only the Wax Kingdom stops at one card space. This is brutal, because it forces you to make your card-exiling decision early in each round, when what you really want to do is push that decision off until late in the round, when you’ve seen the general shape of that round.
It’s really hard to know how to use the Wax Kingdom strategically, because it affects how you calculate score at the end of play… so you need to figure out how other people are planning to use the Wax Kingdom, figure out whether you want to come in first or second for Wax Kingdom ranking, and then play accordingly. It’s probably the most convoluted choice in the game, and maybe I’ll have a better sense for it when I’ve played a few more times. Which I will definitely be doing.
Maybe they tried this and it didn’t work, or maybe it could never work in a deck-building game, but each player chooses one of the four characters, each of whom has their own backstory… but plays exactly the same as the other characters. I liked the story of the character I chose, and I went into the game slightly hoping that there would be a mechanical connection to that in my deck. All of the decks being the same meant that K and I drew the same cards and made identical plays for whole rounds, more than once in the first half of the game. It took us time to figure out how to differentiate our gameplay. I doubt that would be a problem in future games, as I would probably push harder to recruit better cards in the opening rounds next time, instead of splitting my time among several areas.
That’s the sum total of my negative commentary. We had a very good time, I am filled with excitement about making a board game because I feel like I see how this one works, and I want to introduce more friends to this game. I like that the competition is there, but fairly indirect – K and I are both not the greatest with staying chill and objective in competitive games, but this one is just right for us. I also look forward to seeing how three- and four-player games flow differently.
On the FACE scale, four smiley faces. One of the best new game experiences I’ve had this year. My quibbles are actually just conversations I wish I could have with the designer so I could understand why it was the best choice.