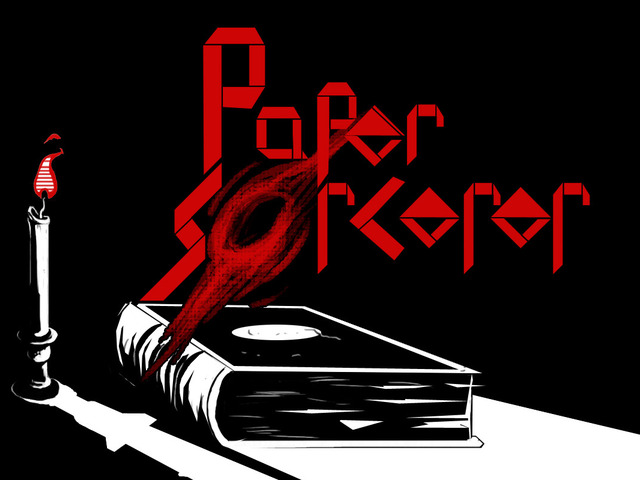 Paper Sorcerer, developed by Jesse Gallagher, displays just how far a game can go on a unique visual aesthetic and a classic format and feel. It offers some additions to traditional dungeon crawl that other games could stand to lift, and it deserves considerable praise for that. It is, on the other hand, not a perfect offering, and I want to talk a bit about the minor points where it falls short. I have not finished the game, so some elements of the story are still a bit unclear to me.

The visual design presents almost everything in a paper-like off-white and black. This sharp contrast is appealing, and over the course of many dungeon levels, the architecture and patterns of the molding change styles often enough to make new levels distinct and striking. The carefully established patterns, in turn, reveal secrets when the pattern breaks. In itself, a pretty basic practice, but the starkness of the art grants it clarity that more realistic visuals sometimes lose.

Monsters are likewise drawn in that sharp, clear style, and since there is no color to differentiate them, their features must be more obviously different. In keeping with the “paper” theme, they are obviously two-dimensional. The player’s characters (a classic team of four) appear briefly at the bottom of the combat area whenever they make attacks. The game’s few hints of color are particle effects from attacks made in combat. Though stylish, this is where the art shows weaknesses: simultaneous particle effects make it near impossible to tell which effects are active on an enemy, and the effect icons on the player’s characters are not especially clear. This could be solved with an ability to inspect friends or enemies during combat, either by mouseover or an additional “Inspect” menu option.

The art style works into the game’s central conceit, as well: the characters are imprisoned inside a magical book. The goal, then, is to break the book’s binding, at the end of each dungeon level. The player is cast as an evil sorcerer imprisoned by heroes, though as the plot develops, that story is called into question – I’ll avoid further spoilers, because the game’s plot is another of its strong points. The rest of the player’s team are, let us say, free of such ambiguities: they are classic creatures from horror stories, everything from a goblin to a vampire to a murderous puppet. Each creature type is, in essence, a character class: for example, the vampire is a high-damage-output healer, while the skeleton is a defender.

The class design is an area where I wish the game allowed more customization. The sorcerer can choose between one of two different class paths, either doubling down on damaging spells or adding in melee abilities and some better armor. All other new abilities that the characters gain, when they gain them, and when they improve are pre-determined. The player can (and really must) spend gold on improving various ability scores, including the all-important Energy stat, but since none of these options are mutually exclusive and all of them are beneficial to every character, it’s just a matter of when you’ll buy them and how far out of your way you’ll go to grind for the cash.

This brings me to the idea that other games need to steal. Sure, you could meander around the same dungeon, back and forth for a week, to pick up more cash. What this game offers instead is a secondary dungeon. The player unlocks each level of the dungeon by exploring the primary dungeon in detail and solving its puzzles. I am glad to see a healthy amount of optional content in what is otherwise a straightforward game without player choice in the narrative. The optional dungeon includes storylines that point back to the main dungeon as well. Ultimately, what I like about this so much is that if you’re stuck in the main dungeon or just looking to do something different for a little while, there’s a lot of content in the game for you. Most games that even touch on this level of optional content are massive open-world games published by Bethesda Softworks, or MMOs.

Unfortunately, keeping gameplay fresh over that many dungeon levels is hard, and Paper Sorcererdoesn’t quite achieve that, which is why I haven’t finished the game. The plot reveals are doled out rather nicely, and the side-quests proceed at a good pace, but level after level of dungeon and pounding your way through monsters with increasingly massive Health and Defense pools (and the ability to replenish one or both of those, though not faster than the player does damage) turns the midgame into a slog. The characters develop new abilities to help with this, but it isn’t quite enough for my tastes; I would say that the aggregate Health and Defense of the monsters needs to be toned down by about 10%.

The game lets you summon more characters than your party roster holds at any one time, which is good. It doesn’t capitalize on that, though, by occasionally forcing the player to use a different lineup for a little while. It would have been a tradeoff to do so, I’ll grant; the player would have to buy up the ability scores of those alternate characters as well, and that makes it tough to judge. As it is, though, I’ve sunk all of my wealth into making my primary characters as powerful as possible, even selling off the weapon upgrades for the characters I’m not playing… so I can’t switch over to those alternates for a little while, if I want to keep having a good time. This is a shame, because the designer clearly put a lot of work into making each character feel distinctive in combat.

The most unusual character of all, the Puppet, is cobbled together from pieces found in the dungeon and on merchants. The head, torso, and limbs grant all of the stats that a murder-puppet needs to thrive in this world of… let’s call it literary escapism, including granting some of the key abilities of other creature types. This is all very cool, but from my little bit of messing around with it, the numbers don’t quite add up – maybe I needed to plan more carefully, but the puppet just didn’t have the hitting power to keep its place on the team. Still, the puppet is a welcome example of a customizable character in the game.

In conclusion, Paper Sorcerer represents a strong creative vision in many areas of development, from art style to writing. Its flaws will be irrelevant to players truly dedicated to classic turn-based, first-person dungeon crawls, such as the Wizardry series by Sir-Tech Software, Inc. Its strengths are worth study by any developer making a dungeon-crawl.

I originally wrote this for Shoost, but since that site has had to close its doors, I’m reposting it here for general consumption.