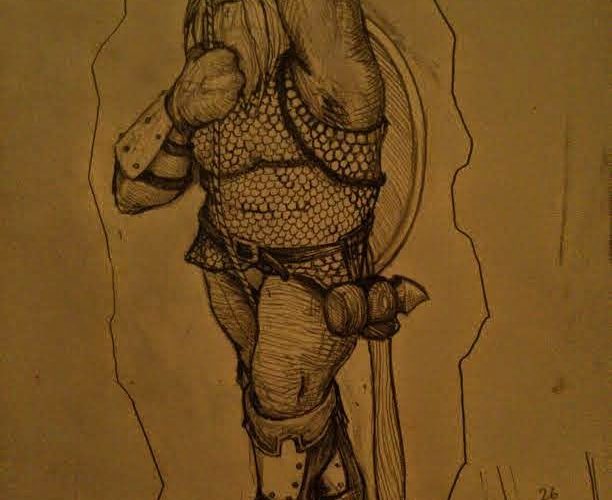 Over the past three weeks, I’ve run three sessions of D&D 5th edition. Across all of these sessions, there have been eighteen different players (Kainenchen played in all three, though very little in the last case; our son was uncooperative). Ranging from people who have played 5e since the earliest public playtests, as I have, to people who had never remotely considered picking up a twenty-sided die with intent before the day of the session, it’s about as great a range of players and session types as I’ve ever run.

We have a tradition, going back to… 2008 I guess?… in which I get together with as many members of my college gaming group as we can muster, and fill out the rest of the party with anyone else who proves to be available. (Kainenchen now gets an automatic invitation – just one of the many great perks of agreeing to marry me.) We play a long session of 6-8 hours, some day in the week following Christmas Day. Sometimes I’m running a one-shot of whatever edition of D&D is current – the first Christmas Special was a three-player session of 4e that was, hands down, one of the best sessions I ever ran of 4e. Another year, it was 4e in the dreamscape. The year after that, I got inspired to hack a magic system into SIFRP – good fundamental design, with some very bad specific elements. I can thank that session for laying a lot of the groundwork of the Aurikesh setting, though!
In 2012 and again this past Christmas (we missed 2013 because Kainenchen was seven months pregnant at the time), the Christmas Special has been a dungeon crawl that was in-continuity with the rest of the campaign. 2012 had three players; this session had eight (!). I feel guilty that I couldn’t invite one more player, as she’s an active Aurikesh player, but my huge table literally could not hold even one more person.
For this session, we had both experienced gamers (inside and outside of 5e), and one very new player (one or two sessions of 4e, I think?). What really impressed me was how quickly 5e kept moving – since there are so few conditional modifiers to consider, the action moved right on along even with eight players and commensurately large encounters. Also, the new player had no apparent difficulty keeping up with the action or the options presented in the Sorcerer (Draconic bloodline) class. I’m relieved she didn’t want to play a Wild Mage, because remembering to trigger Wild Surges would have been tough on me with all of the other stuff I was managing in such a large group.
At the start of the session, the eight PCs included two first-level characters, one second-level character, two third-level characters, and three fourth-level characters. Since it was a long session, I gave out XP after the first big encounter, which bumped the first-level characters to second and the second-level character to third – I don’t think going through quite that many encounters with Tutorial Mode first-level characters would have been all that great.
Interestingly to me, the eight characters present covered nine different classes (the barbarian multi-classed into druid when he hit second level) – there was no class overlap. The encounters were heavily slanted toward combat, though one encounter that I thought might result in conversation became a mercy killing instead. This was not a “wrong” way to handle the situation, just not what I’d expected. The PCs still got the salient information, through observation rather than conversation.
I was impressed that the group managed to take down a by-the-book flesh golem that showed up right at the end of what had already been a long fight. I put the creature into the session as something they would probably need to avoid, and I got the reaction of dread I really wanted when they heard its titanic footfalls – but in the end they stood their ground and murdered it before it could bring the ceiling down on them. Eight characters, just about all of them dealing magic damage, can do a mighty lot in 5e’s bounded-accuracy environment. (This isn’t a slam on 5e – quite the opposite.)
The session also highlighted two weak points in core 5e design.

Ultimately this session was a kind of stress-test for 5e, and it showed no particular trouble in handling things that cause problems in most systems – characters of significantly different power levels, huge groups, and so on. 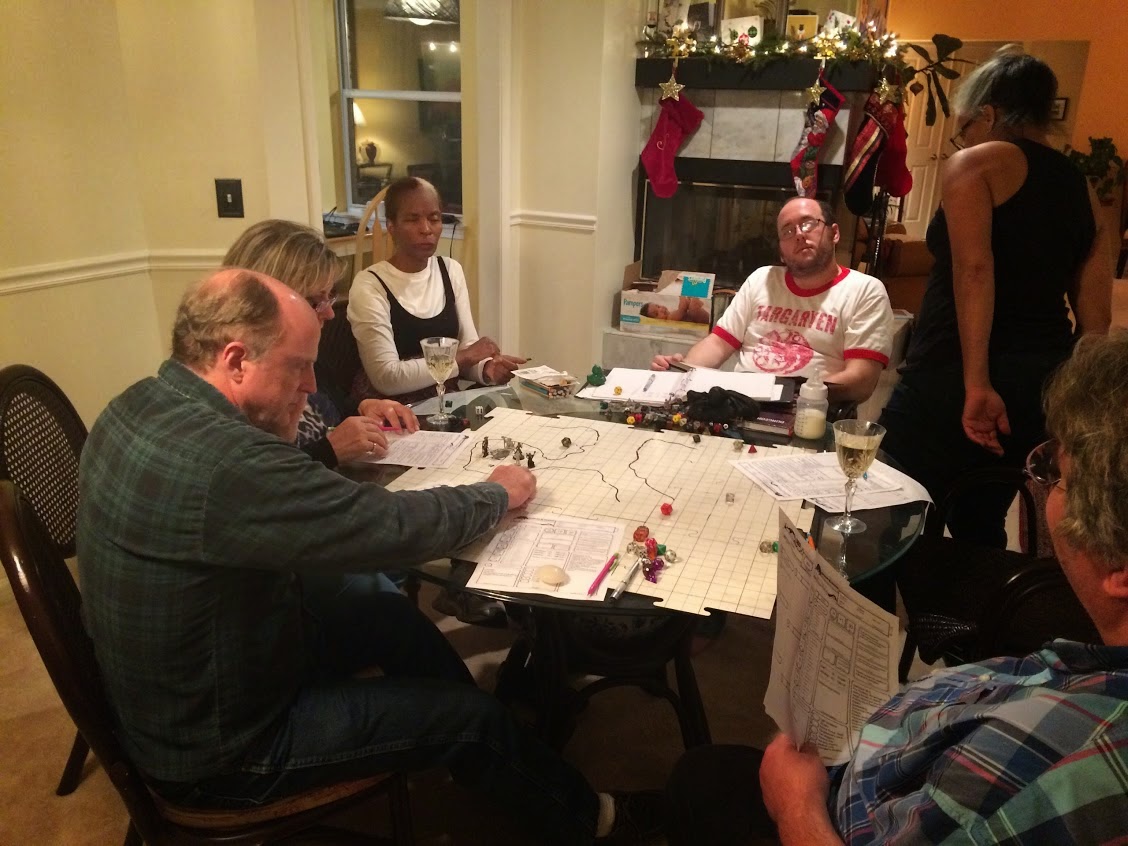 On the second of January, I ran a session for Kainenchen, her parents, and three of her parents’ friends. Other than Kainenchen and me, certainly no one at the table was under fifty. Obviously the two of us have been playing D&D of each edition, going back to 2e in my case and 1e in hers; her dad ran OD&D and 1e for years, but hadn’t really picked up dice in right around two decades, give or take. The other four players had never played D&D and had no idea what it was about other than knowing some of the general concepts of fantasy. For example, they’ve all seen Peter Jackson’s Lord of the Rings films, so I didn’t have to explain elves, dwarves, or half-elves to any of them, and in general they could get a class’s theme from its name.

For this session, I pre-generated first-level characters (fighter, rogue, sorcerer, bard, cleric, ranger), which taught me a few things in itself.

The session involved only two encounters; unfamiliarity with things like “attack rolls” and “damage rolls” and “so what does this spell do again?” slowed things down considerably. The first encounter was a pack of goblins, of about equal numbers to the PCs; they dealt some damage, but on the whole they were stompled. The next encounter was a cavern with recently upturned earth. The PCs dug down a bit, found a coffer, and exposed the ogre zombie that was buried there to kill anyone who stole its treasure. Describing a massive hand and arm emerging from the earth to grab at the fighter was an image even new players could enjoy. I had vague plans for two more encounters, but the hour was late, and I had shown them the basics of what D&D is like.

I don’t expect any of the new players to develop the fervor of the converted and run out to buy books and dice, but it was a fun way to pass an evening and show off this hobby of ours, and they did make some noises about playing again next time we visit. I think I can say definitively that 5e is the easiest edition to teach that I have ever run. I mean, we all know that ascending AC is 500% easier to teach than THAC0, right? I guess if you skip character creation in 3.x, it’s pretty easy to teach, depending on which feats you pick. (I did fail to explain the Lucky feat to the bard’s player. My bad, but she had no context to notice the lack, so it didn’t ruin her enjoyment.) WotC’s character sheet layout also did a good job of provoking questions that made it easy to teach the game, which is something I hadn’t ever considered before.

I think the last time I had to teach D&D to a group where 2/3rds or more of the group had never played any tabletop game before, it was my first gaming group, I was a freshman in high school, and (this seems a strange choice now) I was teaching them 2e in Birthright. All of which is to say that I’ve taught the basics of the game to a tiny handful of people over the years, but mostly I deal with experienced players, and it warps my perspective on a lot of things. Art by +Garrick Andrus, of his dwarf cleric. He missed rope-climbing day in gym class, apparently.

Lost Mine of Phandelver

The third session of the past three weeks is, in a sense, a midpoint between the Aurikesh Christmas Special and the First-Timers Club. I had players who were thoroughly experienced with tabletop games and previous editions of D&D, but had not yet touched 5e. In contrast to teaching people D&D for the first time, I’ve quite often been the DM for a player’s first exposure to some new edition. This particular group had a fractious mix of those who loved 4e and those who didn’t… a topic that came up only a half-dozen times or so in seven hours – quite a low number, in this case.

The players created their own characters, which took about the first two hours of the session – that sounds like a lot, but it’s a table of friends with a lot to talk about and a lot of excitement to play, so crosstalk was part of their fun. Anyway, I was busy cooking beer cheese soup at the time, so they had some amount of help from Kainenchen, but otherwise were on their own to figure the game out from the rulebook. As experienced players, of course, they had no trouble going through the rulebook and figuring things out; I think their number-one question was, “How do I figure out my starting gear?” Okay, that, and the wizard angsted over picking his starting spells for a bit.

The unusual thing about this session wasn’t anything on the player side, though – this was I think the second time in more than twenty-one years of DMing that I have run a published module. (The first: Haunted Halls of Eveningstar, back in high school… junior year, maybe?) I’ve already commented at length on the lore behind the Lost Mine of Phandelver, but I wasn’t sure how well I would run it at the table. Using someone else’s content is one of my weak areas as a DM, and as a writer for that matter.

It turned out well! I found that:

I had a great time with all three sessions. The main thing I gained from them was perspective, on novice players and on ways of running D&D that aren’t my norm. Also, detailed postmortems are the main way I ever learn anything… so thanks for reading.