Home » board games » Mansions of Madness: Informal Review, and some Armchair Design 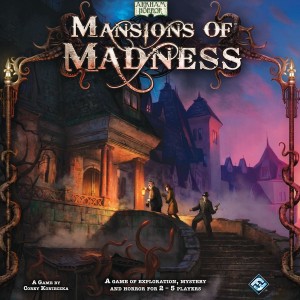 Yesterday, I played my first-ever game of Mansions of Madness with Kainenchen, Stands-in-Fire, and Mrs. Stands-in-Fire. None of us had played before or read the rules exhaustively, though Stands-in-Fire had gone over them a bit – so he played the Keeper. This review, then, is based entirely on player-side experience; I haven’t so much as opened the Keeper’s Guide, and there are going to be big gaps in my understanding of how the Keeper actually functions. The extremely short form of the review is that while I found a few items in their design questionable, I have a deep appreciation for what the game attempts, and I expect to play at least four more times in the future.
That note highlights the first of the game’s strong approaches to story: there are five different map arrangements included in the box. The map is made up of rectangles of various sizes that are the rooms of a building; the map arrangements combine these so that doors meet up with doors and the building is put together in a more-or-less logical fashion. Each map has associated event cards to create the plot for that story. The replay value that is obvious on the surface is five sessions – not bad, considering how completely different those future games will be. Especially in a competitive game (where all players have a strong incentive to vary their gameplay, resulting in different outcomes in the emergent narrative), five different games in one box is pretty good – but that’s just the beginning for this game.
The number of available plays diversifies wildly when you get to the Keeper’s pregame decision points for the story. The Keeper makes three decisions, each of which has (I think) three possible answers. These choices change things on both the narrative side and the strictly-gameplay side. In this regard, the game has a strength for narrative that kind of blows my mind. I was expecting something a little closer to Descent, where the action is nonstop but the narrative is almost self-consciously trite. Instead, I got something with clarity, very strong structure, and some interesting ways of ratcheting up the tension.
Playing through “The Fall of House Lynch,” a lot of the minor goals along the way are finding the keys to get through certain doors. Locked doors are a pretty basic way of gating a map, but I appreciated the way the game directed us generally from one minor goal to the next. It’s possible that some of the bloom would be off the rose for this particular point in future gameplay; there is a risk of feeling like the game is just leading you around by the nose. The underlying problem here, then, is that if you don’t pursue those plot goals with single-minded devotion, you’re losing ground with the Event timer. In our case, we lost about three rounds exploring the dining room and kitchen, and I think all we got for our trouble was the Fire Extinguisher and the Lantern.
The Event cards and associated timer are one of the game’s two key ways of ratcheting up the tension. Less appealingly, the Event cards that we saw just do different degrees of bad things to the Investigators, and they get the worse outcomes if they are following the plot and keeping up with the Event timer. I suspect strongly that this mechanic is intended to re-level the playing field slightly if one side is getting way ahead (it does, after all, punish the Investigators less if they’re not doing well). It’s also highly genre-appropriate for learning more about the mysteries and the Mythos only making things worse for the Investigators, but it means that victory incentives (again, in the one game we played) work against players going along with the plot and trying to solve the mystery. The particular victory condition we played for is