(See previous post.)
I was fortunate that we eventually wound up with four players and a lot of time to play in the game I ran this past Sunday. It looked for awhile like that might not pan out thanks to the Great Southern Ice Age of 2010.

The party consisted of a half-elf ardent, a half-orc brawler fighter, an eladrin thief*, and a human greatweapon fighter*.
* Used Essentials rules

The mission briefing was short and to the point. Matthew Jordan, a cadet at the Citadel, was under suspicion of being a communist, a Russian spy, or an unwittingly controlled foreign agent. The four would enter his mind, search for signs of Russian or other external influence, correct it if possible, and report back.

Entering his mind, they found themselves at the foot of the Washington Monument. There were a cluster of humanoid figures in tactical armor carrying a mix of swords, spears, and assault rifles, all jutting off of the Washington Monument at a right angle. They had ursine features and hammer-and-sickle insignias. In B-movie Russian accents, the leader commanded his comrades to stall the three agents. (The thief’s player was running a bit late, so we started without him; he resolved into the world in the middle of the fight.) It was apparent that each face of the Monument had its own gravity plane. The opposite face of the Monument was glowing red as the agents materialized. At the peak of the Monument was a glowing blue oval.

Peren, the ardent, and Joyce, the slayer (ahem) leapt to the attack before the Russian commander could flee toward the peak. Peren teleported Mort, the brawler, into position behind the commander. Russian soldiers swarmed over all three of them, coordinating their attacks for maximum carnage. (Russians here are using gnoll stats, which grant +5 damage to all when their target is adjacent to two or more of the gnoll’s allies. Being outnumbered 6 to 3 is rough.) The face of the Monument they were standing on began to glow, and soon erupted in flames, just as another face began to glow, and so forth. The three held their own, even so, until the thief finally materialized and joined the fight. At that point, it was mostly cleanup. Once the commander fell, the “mantle of leadership” passed to one of the other soldiers, and another after him; each time the soldier tried to flee toward the portal at the top of the Monument, and each time they were stopped. The brawler’s combat superiority really paid off here. The Russians dissipated as they fell, snapping out of the psychic landscape.

DM’s notes: The PCs fought three Gnoll War Fangs (6th level soldiers), two Gnoll Marauders (6th level skirmishers), and one Gnoll Huntsman (5th level artillery). I completely forgot to use War Fang’s triggered at-will power that gives one of the war fang’s allies an attack if you miss the war fang. This would have made them substantially nastier, but it was a pretty challenging fight even without that (and my obnoxiously high d20 rolls made it a lot worse).

The four agents passed through the portal and arrived in a cavern. Numerous fifteen-foot-tall stalagmites stood in the center of the cavern, with only a few narrow pathways between the obstructions. The four proceeded until one of them spotted what looked like a trap ahead. They studied this in detail, and the eladrin figured out how to insert a wedge under the lip of a nearby pressure plate, preventing it from triggering. Then Peren narrowly avoided the lash of a tentacle from above, and the agents found themselves under attack from two massive, floating brains with writhing tentacles. (This may have resulted in a few jokes. I mean, their attack is called tentacle rake…) 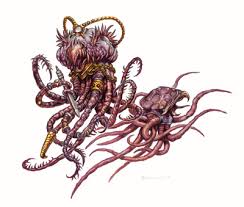 (From www.wizards.com, used without permission)

Once again, Peren teleported Mort into position, and the team tore into the creature. Just then, a second one drifted down and attacked the thief (and yeah, I keep calling him that because I don’t remember the character’s name). The fight went well for the agents, as they hadn’t been separated or weakened by traps. Mort spent about the last half of the fight stunned by their venom. I’d say they won this fight handily. They took a short rest and found a secret door. Behind the door was a staircase leading down.

DM’s notes: This is another example of how I often have trouble using traps effectively in combat situations, because I am unclear on exactly when PCs should get to make checks to notice traps (and I’ll point out here that their Passive Perception is easily high enough to beat the lower DCs). Anyway, they had a fun fight and the thief’s skills were useful, so I can’t really complain.

The four found themselves on a flat, rocky surface near the edge of a very deep, circular pit. Hovering in the pit was a narrow inverted cone of stone. Heavy cables on winches prevented it from floating upward. The psychic core where they’d find anything influence Matthew was near the tip of the cone, and they figured that they’d need the whole team there to analyze and deal with it. They studied it for awhile, trying to figure out how to get the less athletic members of the team down there safely. The eladrin tried to walk out to the floating stone on a cable. He, naturally, rolled the only number that was a failure… He plummeted off the cable and splashed into a water-filled chamber that sealed itself shut a moment later. Peren spoke aloud, communicating directly with Matthew’s mind, and impressed upon Matthew the necessity of rescuing the eladrin. He appeared again at the top of the pit.

The thief was luckier on his second attempt to walk on the cable. Joyce and Mort followed him. Joyce dangled the thief over the pit by his ankles so that he could turn the winches and let out more cable and make the stone float a bit higher. When Peren tried to cross, however, his first and second efforts were entirely in vain, and he twice fell into the watery chambers below. Once down there, though, he had no trouble holding his breath long enough to find his way back to the top of the pit.

The thief let more cable out of the winches, and Peren coaxed Matthew into creating stairs in the side of the floating stone so that they would not have to climb down the bare rock. They came to a landing just above the open chamber holding Matthew’s psychic core, and realized that the floor of that chamber was incredibly sensitive to psychic trauma. They might have been able to creep across it without unduly affecting Matthew’s mind, but instead the eladrin anchored a series of ropes, attached the agents to them with carabiners, and thus got them into the room by hanging from above it.

From that vantage, they studied the pulsating thing on the pedestal in the center of the chamber. It was some sort of unfamiliar psychic technology, certainly not of Russian make. It was nihilistic in its compulsions, not the Stalinist totalitarian impulse they might have expected. With extraordinary exertions of psychic and psychological insight (Arcana, Diplomacy, Insight, and Heal), they extracted it from Matthew’s mental core. It bore only the name Dr. Garamond as some sort of maker’s mark. They took it back to the top of the pit with them, recognizing that any further investigation was going to trigger it and likely start some sort of fight.

DM’s notes: This was, obviously, a skill challenge; the thief found a lot more ways to apply Thievery than I had anticipated, and I haven’t seen this many 1s rolled in a fight in… oh, a few weeks, I guess. Anyway, the DCs were mostly trivial for them; the thief’s unorthodox solution to the psychoactive floor saved the DCs of the extraction part of the challenge from skyrocketing. I’m not sure he realizes that even after the fact.

Several yards away from the edge of the pit, they inspected the psychic seed more thoroughly, and a cackling, clawed monster erupted out of it. Matthew’s mind responded by summoning defenses that attacked both the monster and the agents alike with mining picks and firebombs. The agents had a tough time surrounding the monster so they could collectively beat it to death, as it proved unusually elusive. Nevertheless, Peren’s invitation to defeat proved impossible to decline. Once the monster was defeated, Peren asked Matthew to calm his defenders, and the ten creatures turned their backs on the agents and walked slowly away.

DM’s notes: The brawler and the ardent saved their dailies for this fight, and they just wrecked my poor monster, a 7th level solo skirmisher called the Cackling Marauder. Invitation to Defeat is Bad News, because weakened (save ends) and an aura 1 of weakened for the PC (sustain minor) really took the teeth out of the boss’s attacks. More of the minions (Matthew’s defenses) spawned when the boss was bloodied, and again at 25%. They were never a serious threat, but the PCs didn’t have a controller and didn’t ever try to clean them up, either; at the end of the fight, there were ten active of the twelve that I ever placed. It was a fun, chaotic fight. This brawler played very differently from the brawler I play in the Chessenta campaign.

The agents forcibly woke themselves once the monster was slain and reported everything they had seen to their superiors. They noted that Matthew had been influenced, probably without his knowledge and against his will, and had otherwise cooperated with them to the best of his ability. Their superiors were very concerned with the mention of some new and independent party on the psychic battlefield.

End notes: Two Essentials-based PCs and two pure 4e PCs in the same party is kind of weird. This session is now the sum total of my experience with Essentials, and I think it was generally quite good for a player otherwise unfamiliar with 4e. (Admittedly, that same player’s first experience with 4e was a year earlier, when she played a brutal scoundrel rogue to devastating effect, so she may not have needed whatever help Essentials can be said to give.) I had a hard time adjusting to the fact that the slayer build as a damage output on par with a barbarian. I think the thief was a little less flashy than a normal 4e rogue of a similar level, but the player had a good time and it seemed more or less the same. Ardents are super cool, and invitation to defeat is one seriously mean daily power. It was very strange to me to have the two Essentials characters with no daily abilities whatsoever.