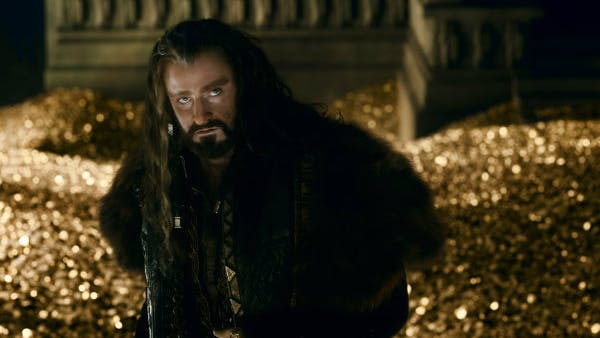 Thorin Oakenshield:  I was blind, but now I begin to see… the Arkenstone! One of them has taken it from me… One of them is false.

I’m sure I’m not the only one here who dreams up mechanics to suit scenes in movies. In this case, I was watching The Hobbit: the Battle of the Five Armies, in which (among other things) Thorin succumbs to his greed, which is explained as more than mere cupidity, but a sickness caused by the long presence of a dragon; the dragon’s greed becomes contagious, passed through the gold. We see the rest of Thorin’s Company recognize what’s going on and try, with varied arguments, to get through to Thorin and remind him of the noble, heroic ideals he once possessed. It’s a common problem in Middle-earth, as well as other settings.

The basic situation is one I’ve seen quite often in games: one character suffers from some kind of magical madness, mind control, or corruption, and the character’s friends would rather not have to knife him. If there’s a magical solution to a magical problem (D&D examples: break enchantment or remove curse), then great, it’s one and done. At the same time, that’s a boring solution to an interesting problem, unless you turn it into a 4e-style skill challenge to cast a ritual. You don’t want to take away the awesome thing the spellcaster waited all of these levels to be able to do, but you also don’t want your villain’s masterstroke of brainwashing the hero to be fixed with a single spell slot.

The main places I’ve seen this, though, have been games where break enchantment and remove curse aren’t on the table as options, such as Shattered Isles and King’s Gate. These games included many storylines about magical and moral corruption, and resultant delusional paranoia, megalomania, et cetera. The characters had no easy solution to cleansing corruption, since even knifing the corrupt person often just created a still worse monster. Fortunately, it was rare for players to lose control of their characters – that required a depth of corruption that few reached.

Okay, so you’ve gone over the edge and your friends are trying to snap you out of it and get you to throw the ring into the fires of Mount Doom or whatever. Your corruption, possession, or the like means that Plot has relieved you of control over your character and given you a briefing as to your new and externally-imposed motives. How do your friends go about solving this problem, and how does Plot decide when they have succeeded?

So, you know, spoilers abound.

La la la. Turn back now, ye who have not read The Hobbit nor seen the movies.

I can’t make this any clearer, O my readers.

Balin: The Arkenstone is our people’s birthright.
Thorin Oakenshield: It is the King’s jewel! AM I NOT THE KING?

Peter Jackson depicts Thorin’s descent into madness throughout the trilogy, from his suspicions of the elves (unjustified toward Elrond and the elves of Rivendell; quite a lot more justified toward Thranduil) to his eventual suspicion of everyone, including his most trusted kinsmen. When the madness takes hold of him, his voice changes to sound more draconic (it’s a pretty nice effect). Anyway, this isn’t film crit – the point here is that much of the first half of The Battle of the Five Armies is Thorin’s plunge into the last stages of madness and corruption, even as all of Thorin’s Company – including Bilbo – struggle to get through to him and call him back to himself.

Finally Thorin is alone, brooding upon the throne of Erebor, just as we saw his grandfather do in flashbacks. He experiences a vision, and in his vision he hears again the pleas and arguments of his companions. What struck me about this is that much of what he hears could be an Aspect in Fate, or a Trait/Bond/Ideal (arguably a Flaw, too) in D&D 5e, or a Belief in Burning Wheel, or… you get the picture.

From a system-side point of view, what happens in a sense is that Thorin’s Corruption is an NPC possessing Thorin. He has to pass some number of tests of willpower to break free of it. Thorin’s companions spent the first two movies and, for the dwarves, the duration of their shared backstory learning Thorin’s Aspects in detail, because they’re maxims Thorin likes to quote (invoking Aspects, obviously). When they cite those things in an argument with him, or maneuver him to the point that he repeats him, Thorin receives a Fate point from the PC as a Compel. Thorin’s Corruption doesn’t receive the Fate point – it has its own Aspects and so on. Thorin, in himself, isn’t being Compelled to do something he would rather not do. So there’s an awkward dance of Thorin’s inability to act on his nature making these invocations of Aspects into Compels.

Ultimately this is handwaving within the Fate system (let me clarify: my limited understanding of Fate) so that it makes rules-sense for the rest of the PCs, even including Bard, Thranduil, and Gandalf, to act upon Thorin in scenes totally separate from the solo scene in which Thorin challenges his Corruption. Up until the vision, there’s no sense that Thorin’s companions are making any headway in their arguments – Thorin usually ends scenes angrier, more paranoid, and more corrupt than he began them.

Now, in most games it would be egregiously unreasonable to ask other players to focus so thoroughly on someone else’s character that they remember his Aspects and creatively insert them back into in-character conversations. On the other hand, in most games you wouldn’t set one PC as the liege-lord of most of the PCs, and the employer of the burglar.

I can see it now. There’s a group of thirteen players at the table (Tolkien is nothing if not an ambitious GM), all of them excited that they’ve agreed on an all-dwarf campaign. They’re super into it, and a bunch of them have been reading up on the GM’s lovingly-crafted dwarf racial briefing – “Created by Aulë, cool! Durin awoke fully formed at Mount Gundabad, cool! Hey, can I be the grandson of this Thrór guy? Awesome.” – and then their last friend shows up and insists on playing someone even shorter who really, seriously does not want to go on this quest and, for that matter, insists on being pissy about all of the property damage they gleefully inflict on his house in the opening scene.

What was I talking about? Oh, right, Thorin. If you’re going to let one PC be the liege-lord of other PCs and you’ve gotten buy-in from the other thirteen players (God help you), it’s a reasonable step to require them to treat that character as if he is the most important. Because he is.

The D&D version of this is similar, except that the function of Inspiration is a little bit inverted, and one of the game’s default assumptions is that players can pass their Inspiration off to others. All of the characters have Traits, an Ideal, a Bond, and a Flaw, and I might suggest that in Tolkien’s campaign he awards every character an additional Ideal, Bond, and Flaw as part of the dwarf race. (This is a pretty cool idea – I should try writing something like that.) Many of the dwarves take the Guild Artisan or Guild Merchant backgrounds – seriously, go read them and tell me those don’t sound like Balin.

Every time Thorin’s Corruption makes him act against his Ideals and Bonds, and every time it makes him obey his Flaw, Thorin receives Inspiration. Furthermore, every time the rest of the Company espouse their Ideals and Bonds instead of going along with Thorin’s Corruption, they gain Inspiration. Of course, Inspiration doesn’t stack in D&D. Tolkien explains to them that Thorin’s player can trigger the final challenge with Thorin’s Corruption whenever he wants, and the players can run as many scenes among themselves as they want before that, but the timeline for the rest of the setting’s conflicts is going to keep advancing – even if Bilbo is the only one to interact with it.

So they have a lot of in-character side conversations, in which Thorin plays his Corruption briefing (getting Inspiration just the once), and the rest of the dwarves espouse their Ideals and Bonds (each earning Inspiration). Finally, Thorin’s player can’t take it any more. There is an absolutely amazing battle right outside and Thorin’s Corruption won’t let him go fight, so he decides that the whole team has enough Inspiration to make this worth trying. In his fight with Thorin’s Corruption, he’s mostly just rolling Wisdom and Charisma saving throws, and needs (let’s say) 10 successes in 14 rolls. The voices he hears, then, are a screen rendition of each member of the Company passing Inspiration to him once he’s spent his own.

There are plenty of other kinds of mechanics and story justifications one can use when the time comes for a character to have a chance to break free of madness. When the character to be restored is a PC, you particularly want to attach mechanics to the scene; many players don’t want the responsibility for deciding when the other characters have done enough cajoling and they should finally succeed. In particular, for many players, that tension between the character’s desire (which is ruled by the corruption – that’s the point) and the player’s desire (to be free and in full control of the character again) is an unpleasant one, since for them there can be no tension as to if and when enough is enough.

Many of those moments of external compulsion in films end with a swift, sharp strike to the head (sorry, Hawkeye), because percussive maintenance apparently works on humans now? In others, the corrupted character is lucky enough to have a real villain come along, bite his finger off, and slip on the precipice overhanging the lava. I mean, just as an example.

Other popular techniques include:

Okay, I could go on like this all night. I’ll end it here, and hope that my description of the good Professor’s tabletop-GMing chops amuses all and sundry.